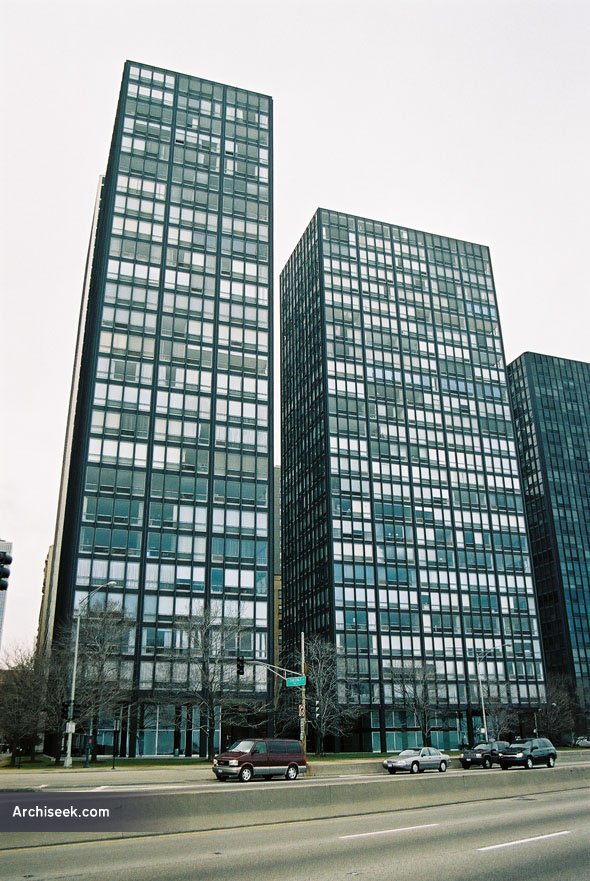 Deceptively simple in appearance, these twin apartment towers set the standard by which all subsequent glass-and-steel highrises are judged. Few, if any, have come even close to these buildings’ perfection in form, proportions, and detailing. No other design by this architect had so immediate or so strong an impact. They are featured in every book on modern architecture, and they are among the best known of the city’s post-World War II architecture. 860-880 Lake Shore Drive buildings become the first buildings designed by Mies van der Rohe to receive Chicago Landmark Status.

The twin high-rises, named after their luxurious addresses, are legends in the lineage of Chicago high-rises and of modern architecture. The most radical feature of the building, though now trite to contemporary eyes because of the countless knock-offs, is the skin-and-bone expression of the steel and glass towers. The steel I-beams effortlessly define the structure while the glass suspends and encloses space. It was, in a way, two buildings that so simply assert their essence that they dematerialize and become ‘almost nothing’.

The scheme consists of two identical 26-story towers placed 46 feet apart with their long axes set perpendicular to each other. The steel skeletal frame is based on a 21-foot grid and is clearly expressed in the elevations, indicated by black-painted steel sheets covering the fireproofed columns and beams. The rigorous consistency of the design is seen in the uniform treatment of each building face regardless of orientation. Each bay is subdivided into four window units by three wide-flange steel mullions. A supplementary mullion is welded to the face of the exterior by the others. Within these divisions aluminum-framed floor-to-ceiling windows are set. The significance of this work is a pioneer curtain-wall expression as well as a fulfillment of the all-glass skyscraper schemes proposed by Mies three decades earlier.

The popular criticism about these buildings is because of Chicago’s building code, Mies had to cover and fireproof his steel structure. He subsequently added I-beams of different scales onto the facade for the columns and the mullions. This detail was derided because critics claimed that the appliqués presented a falsehood, a facade not in harmony with Mies’ doctrinarian belief about structure and truth. In response, Mies replied:

“… first I am going to tell you the real reason for those mullions, and them I am going to tell you a good reason by itself. It was very important to preserve and extend the rhythm which the mullions set up on the rest of the building. We looked at it on the model without the steel section [I-beams] attached to the corner columns and it did not look right. That is the real reason. Now the other reason is that the steel section was needed to stiffen the plate which covers the corner column so this plate would not ripple, and also we needed it for strength when the sections were hoisted into place. Now, of course, that’s a very good reason-but the other one is the real reason.”

When Mies was designing the buildings, he considered moving into the 880 Building. Two years later after the building were completed he studied various spatial configurations and the interior walls treatment. Ultimately he chose not to live in his building, it is said, because he felt he might be too frequently bothered by encounters with querulous neighbors.