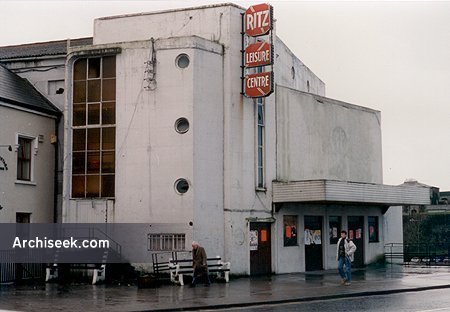 The Ritz Cinema in Athlone (1939) is attributed to Scott but was in fact designed by Bill O’Dwyer who was working and studying in the office of Michael Scott at that time. While it is impossible for a successful architect to fully design all the buildings that come into his practice, Scott seems to have produced only rough sketches for the project leaving O’Dwyer to design the building. O’Dwyer was to be responsible for many of the cinema commissions undertaken by the firm in these years including two other Ritz cinemas at Carlow (1937) and Clonmel (1940).

The Ritz, Athlone was constructed on pilotis on a riverside site. The original perspective drawings include large areas of glazing on the façade as well as between the pilotis on the side elevation, where a riverside restaurant was to be sited. Most of this was never completed as the budget did not allow it to be fitted to the finished building. The interior was dominated by a double height public space lit by a large expanse of glass on the front façade. This can be seen as a predecessor to the entrance foyer to the Government offices in Busáras, with its fully glazed façade.

Again incorporating the work of artists, the interior of the theatre had carved figures designed by Louis le Brocquy. With its large areas of white plaster, glazing, porthole windows and flat roofs, the building reflects the maritime imagery of the time, and still seems quite alien in this traditional country market town. It is clearly of the same lineage as Geragh and the World Fair Pavilion. The building today was largely intact, though much dilapidated and derelict, until it was finally demolished in the late 1990s.