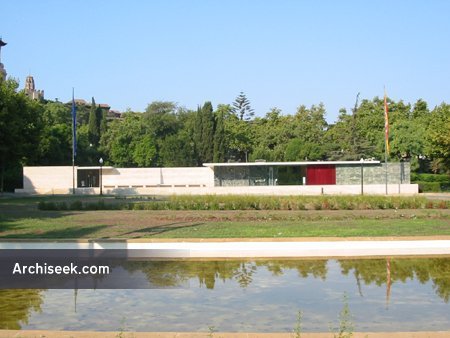 One of the classic designs of International Modernism, technically this building should be called the German Pavilion in Barcelona, since it was constructed as a temporary building for the International Exposition in Barcelona of 1929. Though temporary, it was still made of permanent materials–steel, glass, marble, and travertine. The Barcelona Pavilion was designed to represent Germany’s “˜openness, liberality, modernity and internationalism”¦we do not want anything but clarity, simplicity and honesty,’ stipulated the Commissar General of the Reich. A prominent member of the German architectural avant-garde, Ludwig Mies van der Rohe, was commissioned to design it. A year later he would be the Director of the Bauhaus School for art, crafts and architecture, and forty years after that he would be commemorated as one of the great architects of the twentieth century. Although the building was dismantled in 1930 it was rebuilt on the original site by a team of three architects in 1986.

Mies also designed the chairs and stools which were expensive but austere in look: white leather strands are interweaved on thick, firm cushions and the x-shaped frame is in chromed steel. The chairs were designed to be used as thrones for the Spanish King and Queen when the German Ambassador received them. There was no other furniture or fixtures, apart from a deep red velvet curtain. The “˜Barcelona’ chair and stool have become twentieth century classics.

According to Mies: “Right from the beginning I had a clear idea of what to do with that pavilion. But nothing was fixed yet, it was still a bit hazy. But then when I visited the showrooms of a marble firm at Hamburg, I said: “Tell me, haven’t you got something else, something really beautiful?” I thought of that freestanding wall I had, and so they said: “Well, we have a big block of onyx. But that block is sold””to the North German Lloyd.” They want to make big vases from it for the dining room in a new steamer. So I said: ‘Listen, let me see it, ‘ and they at once shouted: ‘No, no, no, that can’t be done, for Heaven’s sake you mustn’t touch that marvellous piece.” But I said: “Just give me a hammer, will you, and I’ll show you how we used to do that at home.” So reluctantly they brought a hammer, and they were curious whether I would want to chip away a corner. But no, I hit the block hard just once right in the middle, and off came a thin slab the size of my hand. ‘Now go and polish it at once so that I can see it.” And so we decided to use onyx. We fixed the quantities and brought the stone.”