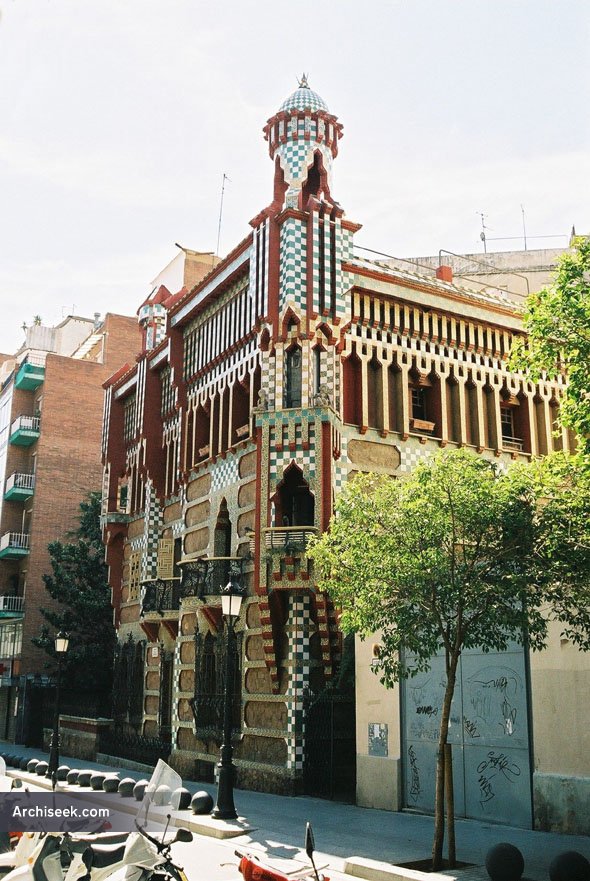 Between 1878 and 1880, Seà±or Manuel Vicens i Montaner commissioned Gaudí to build a house on the lot that he inherited from his mother in 1877. Gaudí’s original plans are dated March 1883. The land was between the Convento de Monjas de la Caridad de San Vicente de Paül (Convent of the Nuns of Charity of St. Vincent of Paul) and a dead-end alley that runs perpendicular to Carrer de les Carolines. Gaudí built the house against the wall of the convent, producing a large and spacious garden. For the other side of the garden, Gaudí designed a monumental fountain built with open brickwork, made up of a parabolic arch topped by a passage between columns. The water was stored in two tanks placed above the pillars to each side of the fountain. The fountain was demolished in 1946 due to the sale of that part of the land. Casa Vicens was built around two bays that run parallel to the wall that was shared with the convent; wooden beams and Catalan-style vaults were built over the bays, except in the basement, where masonry vaults were used.

The roof is sloped on two sides, with four gables; there is a small path around the edge of the roof, which allows it to be easily maintained. As in all Gaudí’s works, the ventilation conducts and chimneys are profusely decorated with the same ceramic material as the facade. They grab the attention of every passerby.

The facade walls are adorned with horizontal rows of ceramics that represent the African marigolds that Gaudí saw on the land before the project was begun. This budding originality is seen in the bands of glazed ceramic on the lower part of the building and on the columns of the upper section with its large towers at the corners. Especially exceptional is the interior decoration in Mudejar style, a combination of the elements of Christian art with Arab ornamentation. The interior is at times completely patterned after decorative styles in vogue in Granada in the 14th and 15th centuries, such as the stylized stalactitic ceiling in the fumoir.

Throughout the ground floor, ornamentation is linked together by an abundance of color and life. The ceiling is vividly naturalistic in expression with sculpted sparrows and bunches of cherries surrounding the beams suspended by slender cords. The flowers and plants destroyed by the construction reappear in the building as elements of the architecture. The building was expanded in 1925-1926 under the architect Juan B. de Serra Martínez keeping to the original style and under the guidance of Gaudí. The building remains privately owned.