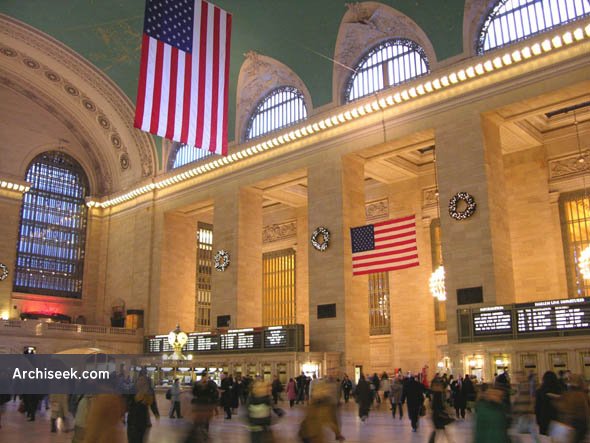 Grand Central Terminal was designed by the architectural firms of Reed and Stern and Warren and Wetmore, who entered an agreement to act as the associated architects of Grand Central Terminal in February 1904. Reed & Stern were responsible for the overall design of the station, Warren and Wetmore added architectural details and the Beaux-Arts style. Charles Reed was appointed the chief executive for the collaboration between the two firms, and promptly appointed Alfred T. Fellheimer as head of the combined design team.

In 1954 William Zeckendorf proposed replacing Grand Central with an 80-story, 4.8-million square foot tower, 500 feet taller than the Empire State Building. I. M. Pei created a pinched-cylinder design that took the form of a glass cylinder with a wasp waist. The plan was abandoned. In 1955 Erwin S. Wolfson made his first proposal for a tower north of the Terminal replacing the Terminal’s six-story office building. A revised Wolfson plan was approved in 1958 and the Pan Am Building was completed in 1963.

In 1968 further plans for a tower designed by Marcel Breuer even bigger than the Pan Am Building to be built over Grand Central was unveiled. All these proposals eventually led to a Supreme Court ruling, Penn Central Transportation Co. v. New York City (1978), which saved the building.