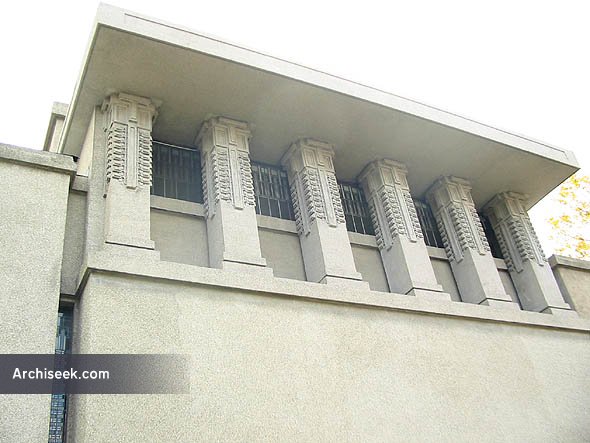 In 1905, after the original Unity Church burned down, the Unitarian congregation of Oak Park, Illinois turned to architect Frank Lloyd Wright to design them a new structure. There were several immediate problems that the architect had to work with in order to satisfy the client. The budget for the Unitarian congregation was rather small for its needs: $40,000 US dollars; and the proposed building site was long, but not very wide. Additionally, the building site stood on a busy street. And finally, the architect was expected to design not only the structure, but furniture and stained glass for the building.

To reduce construction costs, Wright chose steel-reinforced concrete as the main building material for Unity Temple. The outer walls of Unity Temple show the layers of poured concrete, and this was an effect that the architect seems to have encouraged. His desire to create a house of worship expressing the powerful simplicity of ancient temples prompted his suggestion that it be called a “temple” rather than a church.

To reduce noise from the street, he eliminated street level windows in the temple. Instead, natural light comes from stained glass windows in the roof, or clerestories along the upper walls. Because the members of the parish would not be able to look outside, Unity Temple’s stained glass was designed with green, yellow, and brown tones in order to evoke the colors of nature. The main floor of the temple is accessed via a lower floor, and the room also has two balconies for the seating of the congregation. These varying seating levels allowed the architect to design a building to fit the size of the congregation, but efficiently: no one person in the congregation is more than 40 feet from the pulpit.