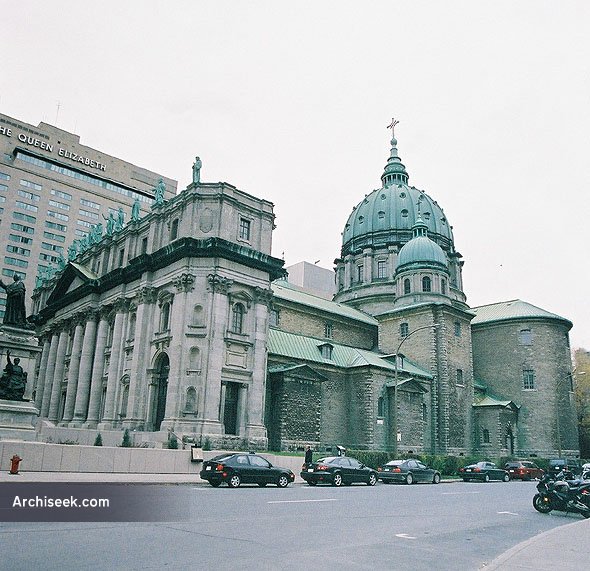 Designed to replace the former Saint-Jacques Cathedral which had burned in 1852, the ishop Mgr. Ignace Bourget wanted to create a scale model of Saint Peter’s Basilica in Rome. The site sparked controversy due to its location in the western part of downtown, in a then mostly English neighbourhood far from the homes of the French-Canadian church-goers.

The first architect, Victor Bourgeau, refused the project after studying St. Peter’s, claiming that it could not be reproduced on a smaller scale. The undeterred bishop sent Fr. Joseph Michaud instead. Work began in 1875 and the new church was consecrated in 1894 as Saint-Jacques Cathedral, after Saint James the Great, the patron of the parish the church served. At the time it was the largest church in Quebec. It was made a minor basilica in 1919 by Pope Benedict XV. It was rededicated in 1955 to Mary, Queen of the World, by Pope Pius XII at the request of Cardinal Paul-Émile Léger.

Instead of the statues of the twelve apostles on the façade of St. Peter’s, the front of the church is topped by statues of the patron saints of thirteen parishes of Montreal who donated them. The interior, which is also copied from St. Peter’s, includes a baldaquin which is a scale model of Bernini’s.