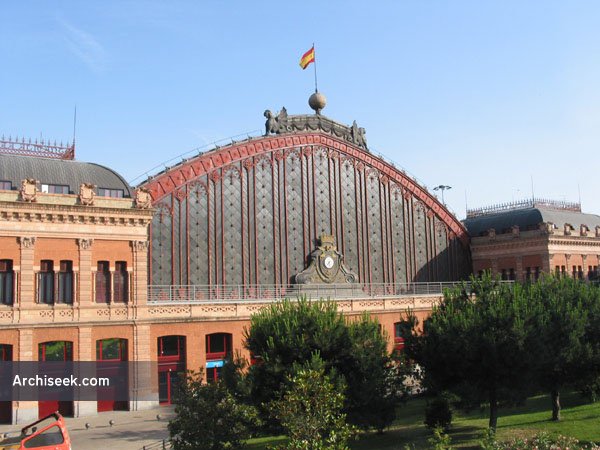 The station was Madrid’s first railway station. It was inaugurated on 9 February 1851 under the name Estación de Mediodía (South Station). After the building was largely destroyed by fire, it was rebuilt and reopened in 1892. The architect for the replacement, a huge wrought-iron structure was Alberto de Palacio Elissagne, who collaborated with Gustave Eiffel.

This old building was taken out of service in 1992 and converted into a concourse with shops, cafés, a nightclub, and a covered tropical garden. A modern terminal by Rafael Moneo, designed to serve the new AVE trains to Seville, was added to the complex. The main lines end in the new terminal; commuter train platforms are located underground, at the ingress to a rail tunnel extending northward under the Paseo de la Castellana.

The station was targeted by nine of the train bombs and two car bombs during the 11 March 2004 Madrid attacks. Of those, the three bombs on one train exploded in the station, and four of the remaining bombs, on another train, exploded some distance away at the Calle Téllez. Two further bombs on the train at the Calle Téllez, along with the car bombs, did not go off and were destroyed in controlled explosions. It was speculated that the aim may have been to destroy the station entirely. 89 people died on the two trains that exploded.