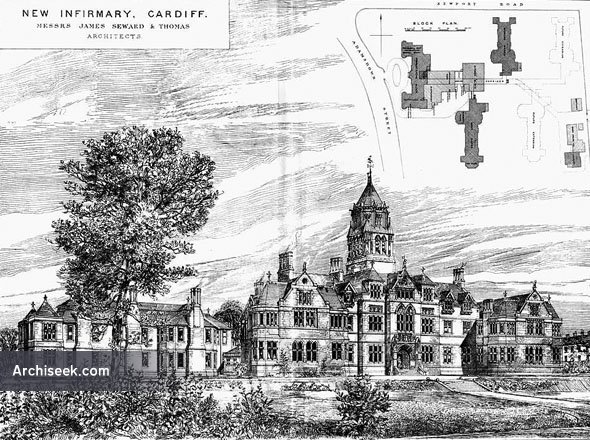 “This building is intended to replace an existing structure erected for a similar purpose about 35 years ago by the munificence of Mr. Daniel Jones, of Beaupre. The site has roads on north, south, and western sides, from the latter of which the administrative block will be entered. A corridor extends eastward from this block, from which the ward blocks will branch alternately north and south. There will be accommodation for 102 beds by the present contract, and allowance for future extension to a similar number has been arranged. The wards will be warmed with the Thermhydric grates, and the latest improvements for the admission of fresh air and the extraction of foul air will be applied. The architects are Messrs. James, Seward, and Thomas, of Cardiff, and tenders are now being invited for its erection, which will be commenced early in the new year.” Published in The Building News, December 23 1881.