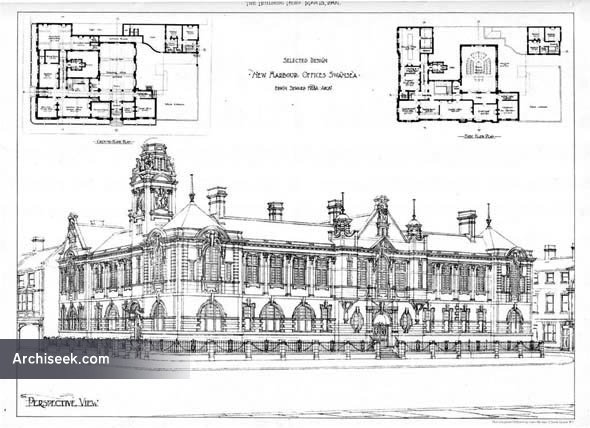 Now a boutique hotel, but originally completed in 1903, and was designed by architect Edwin Seward who submitted the winning design out of 97 entries. “The plans and view illustrate the design which was placed first among 97 competitors in the recent competition for this building, the first premium being awarded to the author, Mr. Edwin Seward. F.R.I.B A., of Cardiff, by the assessor, Mr. W.M. Fawcett, M.A., of Cambridge. The work is to be carried out in red brick, with dressings of local stone and slate roofs.”

The original character of the building is still preserved after its conversion to a hotel: the decorative exterior is clad in red brick and white stone and topped by a Greek statue-clad clock cupola; the interior features stained glass with compasses, exploration and maritime themes. A mural depicting tall masted ships on the River Tawe, overlooked by Swansea Castle, decorates the boardroom. Previous names for the building have included Associated British Ports Building and Swansea Harbour Trust Building, reflecting the names of the building’s occupiers.