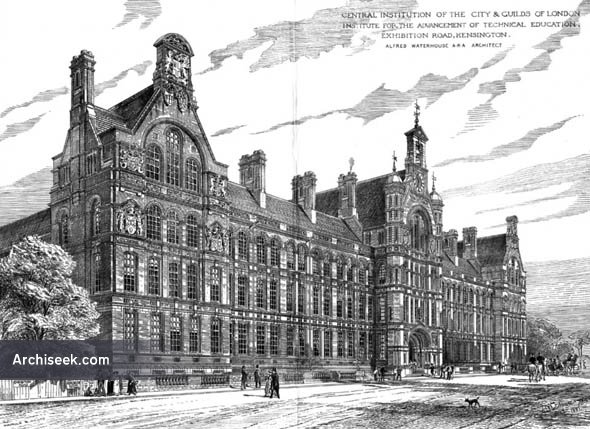 Published in The Building News, December 23rd 1881. The Central Technical College building was designed by Alfred Waterhouse, better known as the architect of the Natural History Museum. The City and Guilds Waterhouse building opened in 1884 and full time teaching began in 1885. Located adjacent to the Central Institute on the site were the Royal School of Mines and the Royal College of Science. In 1907, the latter two colleges were incorporated by Royal Charter into the Imperial College of Science and Technology and the CGLI Central Technical College was renamed the City and Guilds College, and incorporated into Imperial College in 1910. The Waterhouse building was demolished in 1962 in the course of the rebuilding of Imperial College.

“The building will consist of a front of 300ft. in length, of five stories in height, averaging 11ft. 6in, from floor to floor so fir as regards all but the topmost, which will be of varying heights, the central room and the two rooms at the extremities of the building being much higher than the rest. The north-west corner at the back is only four stories in height, consequent on the greater height of the lecture-rooms penetrating the first floor. As it is not known how far light can be commanded on the north and south sides of the plot, it has been decided, with the exception of the two front end gables, which, of course, derive their light from the east, towards Exhibition-road, to set the building back 20ft. from the boundary north and south. On the western side the building comes right up to the boundary along its entire length. Should the Institution ever be extended beyond the bounds of the present site, the are areas on the north and south might possibly be widened to 40ft , and to give excellent internal courts for light and ventilation. A corridor 10 ft. wide runs right through the building from north to south, and there is a cross corridor 7ft. wide in the return portion of the building on the north. All the space at the back behind the main corridor (with the exception of the lecture -room wing on the north) is left for the present unoccupied, save by workshops under glass roofs at the basement floor level extending over a portion of the space. This main corridor is lighted by large windows at either end, and by a range of windows on either side of the main staircase on the ground- floor and upwards, and also by the windows themselves. The main staircase, which rises by a double flight immediately opposite the principal entrance lights by its numerous windows the centre of the building. The entrance is in the centre of the main front, the ground floor level being approached by about ten steps from Exhibition-road through a large and handsome hall, 37ft. by 33ft. 6in., the groined ceiling of which is supported by four piers, the inner ones being of granite.” Published in The Building News, December 23 1881.