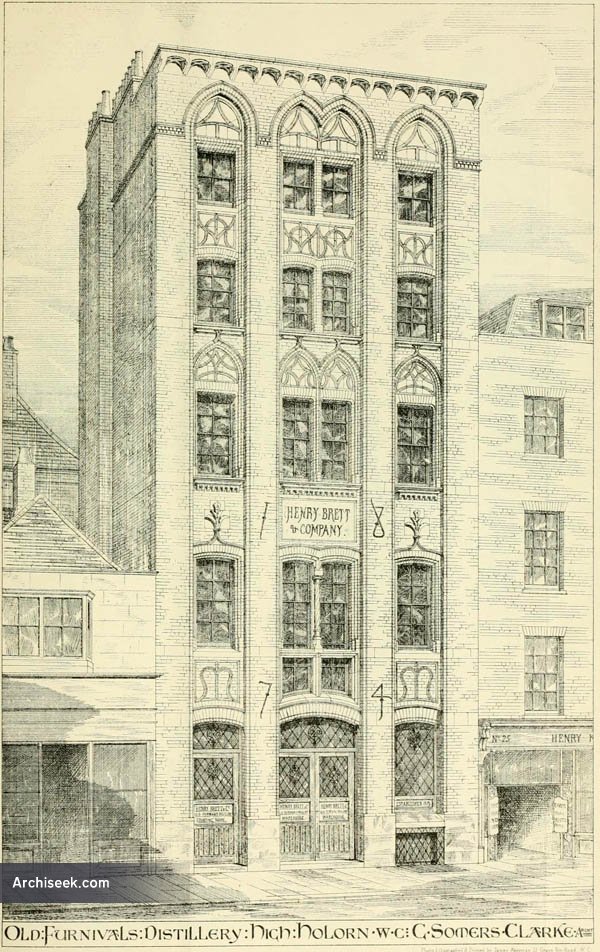 Published in The Building News, December 26 1873: “Nos. 26 and 27, High Holborn, have been taken by Messrs. Henry Brett and Co., of the Old Furnival’s Distillery, and have undergone extensive alterations, under the supervision of Mr. G. Somers Clarke, architect, of Cockspur-street. The old front and back walls have been taken down and rebuilt from tho foundations, the ground and first-floor thrown into one, with gallery round for counting-houses, partners* rooms, &c., &c. The back premises, including an open court, have been converted into large vat stores, covered by a curved brace span open timber roof, lighted at the top by a lantern the length of the store. Wine vaults, strong-room, engine and boiler-house, also bottle-washing and packing-rooms, &o., are in the basement. The new front in Holborn is executed in moulded and cut red Suffolk facing bricks, the panels and tracery over windows partly in cut bricks and partly in red Dumfries stone, a stone that is deeper in tone than the Mansfield, and harmonizes better with the red facing bricks. The levels of the floors above the first-floor, together with the original roofs of the Holborn front remain unaltered, and to that ex- tent determine the proportion and height of the windows accordingly. The retention of the existing flat pitched roofs has necessitated the adoption of a moulded corbelled parapet, taking up at the returns with the original coping of the old party-walls. The works are being executed by Messrs. Gammon and Sons, of London. The circular iron staircase was supplied by Messrs. Cottam and Co. ; the ornamental ironwork by Messrs. Hart, Son, Pears, and Co. Mr. T. Bovan was Clerk of the Works. “