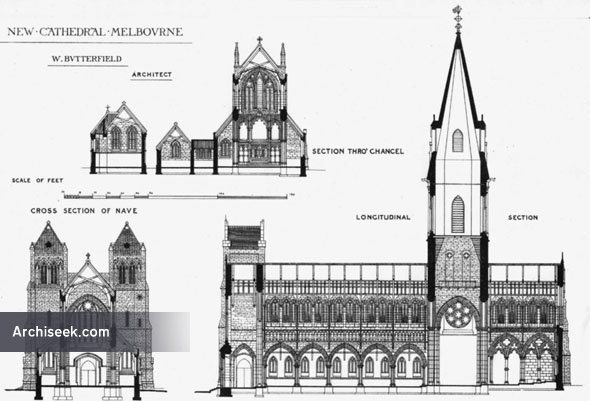 The Architectural style of the Cathedral is best described as Gothic transitional, being partly Early English and partly Decorated. It was designed by the distinguished English architect William Butterfield, who was noted for his ecclesiastical work, and the foundation stone was laid in 1880. Butterfield steadfastly refused to visit Melbourne and the building program was beset with all the problems that arise from management by remote control. He resigned from the project briefly in 1882 and finally in 1884, and the building was completed under the supervision of Joseph Reed, who designed many of Melbourne’s public buildings. Nonetheless, St Paul’s remains Butterfield’s final masterpiece.

“By the courtesy of the architect, Mr. William Butterfield, we are enabled to give illustration this week of the proposed cathedral for the Church of England in Melbourne, Australia. It is to be erected of stone in that city, upon a site upon which St. Paul’s Church, parsonage, and schools now stand. It is hoped that a hundred thousand pounds, equivalent to about sixty-five thousand pounds in England, may be raised for this purpose. A large portion of a cathedral at Adelaide, Australia, has been already built from Mr. Butterfield’s designs, and was consecrated about fifteen months since. In an early number we intend to give some further illustrations of the Melbourne Cathedral, including the sections, so that the principal of the general working drawings of this important biulding will be placed before our readers.”