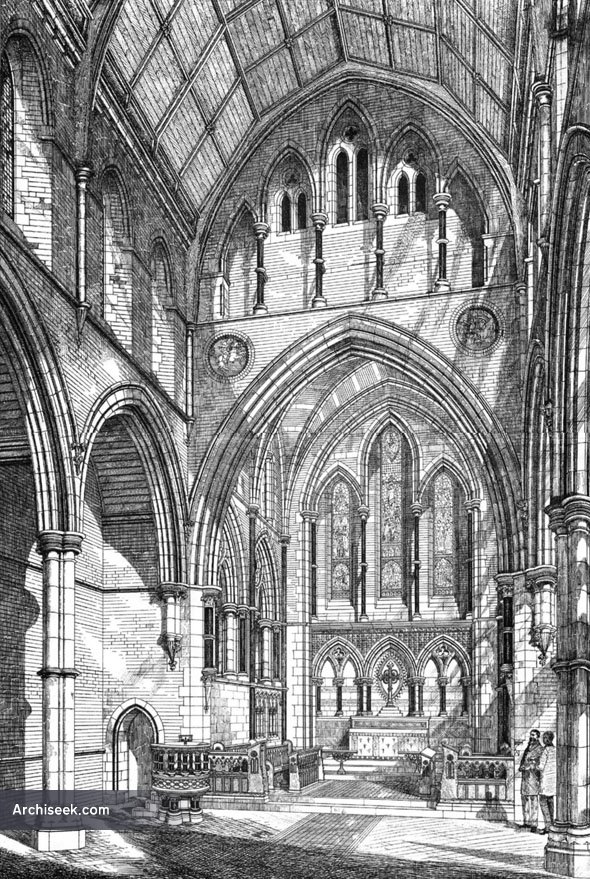 “This church is being built by the trustees of the Grosvenor Estate, to meet the wants of the poorer inhabitants of the immediate neighbour- hood, and to supply the place of St. Mary’s Chapel in Park- street, which is unconsecrated, and will be pulled down as soon as this church is complete. No district will be assigned, and the new church will be a chapel of ease to the parish church of St. George, Hanover-square. The site is small, and will be entirely covered by the new building. In plan it consists of a nave with side aisles, a chancel and south aisle, and a small tower at the south-west angle. The vestries, &c., are in a crypt under the east end, approached by steps on the north side of chancel. The church is being built of red brick and stone externally. Internally picked stocks and white bricks in bands are used as well as red, with Bath stone. Lascelles’ material is also used for some of the shafts. The chancel with its south aisle is groined with stone ribs and brick filling in, the vaulting shafts being of Purbeck marble. The roofs of nave and aisles are of pitch-pine. Mr. Blomfield, M.A., is the architect, and the contractors are Messrs. Macey and Sons.” Published in The Building News, December 24, 1880.