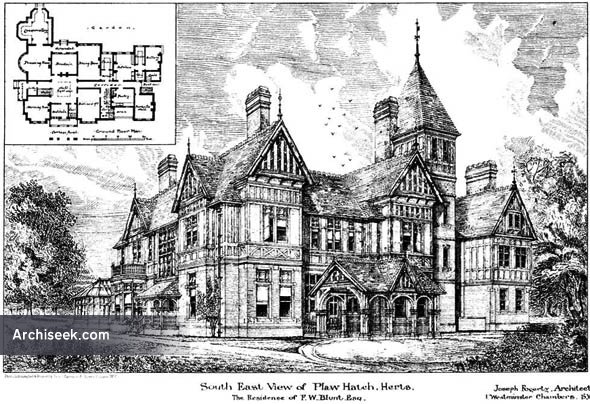 Now known as Pearse House, it hasn’t been used as a residence for many years – being used as a hospital annex in the Second World War, an officers’ mess by USAF 344th Bombardment Group stationed at Stansted, and in 1946 was acquired by Herts and Essex High School for use as a boarding house. The school ceased to take in boarders from July 1966, at which time Pearse House was taken over by the Education Committee of Hertfordshire and run as a residential centre for county, junior and middle schools. Since 1977 Pearse House has become a successful management training and conference centre, as well as a reception centre for private functions and special occasions.

South east view of the residence of F.W. Blunt esq. including ground plan published in The Building News, December 26th 1879. “The house which forms the subject of an illustration this week has been recently erected from the designs of Mr. Joseph Fogerty, architect, of No. 1, Westminster Chambers, for F. W. Blimt, Esq., of Bishops Stortford. The house is in the Old English ” half-timbered ” style, the timbering throughout being let into the brickwork 4in. and forming a substantial part of the structure, and not a mere sham external decoration, as frequently is the case with modem imitations of the old half-timbered work. English oak has been extensively used in the work, and was obtained at a moderate cost in the neighbourhood. The upper portion of the external exposed facing between the half-timbering is rendered in “compo,” and finely pebble- dashed, the framing being grooved to key the plastering in the panels and bays. The lower external brickwork is faced with hard red pressed bricks jointed with black mortar. Portland stone has been chiefly used in the sills and mullions of the windows, and Lascelles’ patent red concrete in the moulded strings and chimney caps. The contract for the building was executed by Mr. W. H. Lascelles, of Bimhill-row. The house is roofed with tiles, and, although erected during a severe winter and wet spring, was found to be remarkably dry at completion, proving that this style of construction is admirably adapted for this climate. The external walls are a brick and half throughout, and consequently there is a 9in. backing of brick wall to the half-timbering. The total cost is about £9,000, which gives a remarkably low figure per foot for the cubic contents of the house, in which it will be seen from the plans there is very large accommodation. There is an extensive basement and a number of servants’ rooms, &c., in the attic story. Mr. George Perry was clerk of the works. “