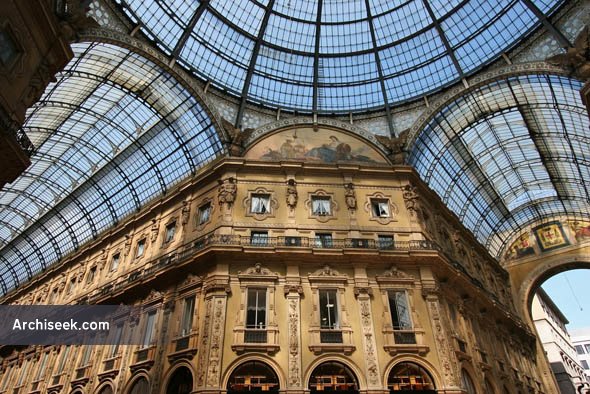 Two intersecting streets make a cruciform plan with domed octagon at center. Glass-roofed arcade with shops and cafes – an early formal covered street. The street is covered over by an arching glass and steel roof, a popular design for nineteenth-century shopping malls or “arcades” such as the Burlington Arcade, London, which was the prototype for larger glazed shopping arcades, beginning with the Saint-Hubert Gallery in Brussels (opened 1847) and the Passazh in St Petersburg, (opened 1848) and including the Galleria Umberto I in Naples (opened 1890). The central point is topped with a glass dome. The Milanese Galleria was larger in scale than its predecessors and was an important step in the evolution of the modern shopping mall.