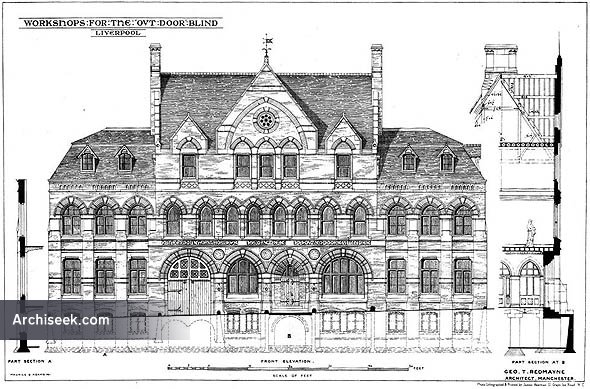 From The Building News, November 28, 1873: “Last week we gave an elevation of these workshops. To explain its title and render more apparent the fitness of the building for its purpose, it should be stated that tho institution is for providing work, without residence, for the blind of both sexes, instructing tho ignorant of the trades carried on in the building, and as regards the women and the younger workers, for providing them with general instruction during certain hours of tho day ; also for providing lectures and social gatherings for the workers after working-hours.

These two latter objects explain the use of the “Public and Classroom” on the first floor. The institution not being as yet wholly self-supporting, and having an element of charity about it, it has been necessary to give up rather an important part to the executive, such as on the ground-floor showroom or shop, by way of interesting the public and courting business. A large gateway was necessary for the easy admission of bulky goods, such as rods for the basketmaking, and bundles of yarn for matmaking. Considerable room had to be provided on the first floor for “Committee and Lady Visitors,” who spend many hours daily in the building cutting out and preparing work for tho women. Over these, on tho third floor is the manager’s residence, consistiog of dining-room, two bedrooms, and kitchen, &c. Right of light existed only to the front; long rooms were demanded by the natures of the trades, a yard for lounge for tho men in their dinner hour, and much light throughout the building for the health of the workers were very necessary ; hence tho plan adopted, most of tho large workshops are floored with Dennett’s flooring and cement on wrought-iron girders. The whole of the building is heated with hot air, and ventilated by a powerful extract shaft, by Messrs. Haden and Son. The front of the building and such portions of the sides as shown above tho adjoining property, are executed in Aston Hall cream-coloured, bricks, with brown salted brick bands, and Wootton stone dressings, the remainder in’ common bricks. The work was carried out in tho year 1870 for the sum of £7,300.”