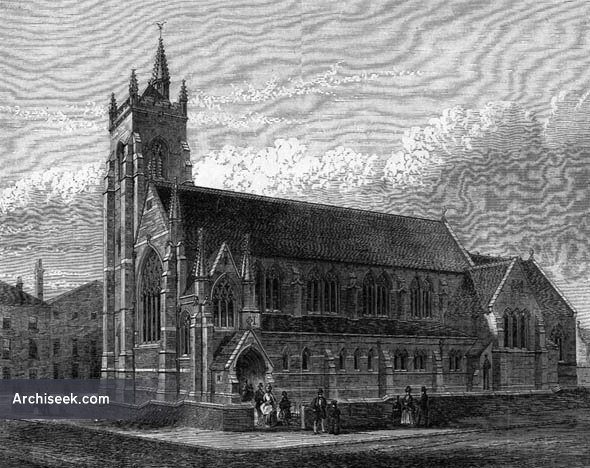 From The Building News, December 26 1873: “The church of S. Anne at Liverpool, which we give among our illustrations, replaces a very inferior building of late Georgian type, which formerly stood across the end of S. Anne-street. The progress of public improvement necessitated the cutting through of the graveyard, and the replacement of tho church itself. The old church stood north and south, and had merely a recess instead of a chancel. The new building is placed east and west and consists of nave and aisles, chancel, sacristy, organ-chamber, tower at north-west angle, and porch. It is built of red brick, with dressings, bands, and tracery of the local red sandstone. The church accommodates about 750 persons, and has been erected for the small sum of £7.000, including the stained glass and interior decoration, executed by Messrs. Cottier. The architect was Mr. E. R. Robson, of 20 Great George-street, Westminster. “