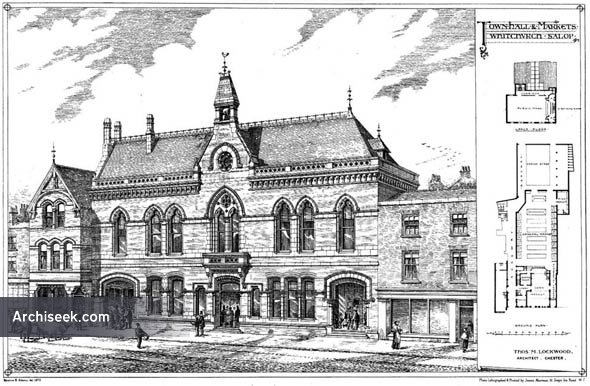 From The Building News, October 3, 1873: “Those buildings were erected in 1872, from the designs of Mr. Thos. M. Lockwood, architect, Chester. The design was selected in a limited competition, and the plan comprises the following arrangements, viz.. Corn Exchange, 56ft. long by 32ft., average width, with three separate entrances ; offices of local board, consisting of public offices and board room, with lavatories, &c. These, with the two entrances to market, occupy the entire frontage of 76ft. to the High-street. Over this is situated the public hall, G5ft. long, by 41ft. in width, with raised plaform at end, and retiring-rooms, &c. The access to public room is from the roadway to market by a stone staircase of ample width ; there is also a staircase from Corn Exchange, communicating with tho corridor and retiring-rooms. The basement is occupied by largo cellars, with separate access and rolling-way. The general market is immediately behind the front block, being 120ft. long, and COft. wide, 19ft. in height at eaves ; roofed in one span by means of principals of timber and iron construction. The space behind the general market is 61ft, by 78ft., used for vegetables on ordinary days, and for cheese, &c., on fair days. It extends to the S. Mary’s- street at the rear, to which it has two exits. The road to the left of market forms a direct communication between the two streets. Tho Fish Market is 85ft. long and 18ft. wide, and is, with the other market, well lighted by skylights and ventilated by louvres.

A small residence for the inspector is placed over a portion of the market, with office, &c., from which the whole of the markets are under complete supervision. The front of building is of brickwork, with dressings of Grinshill stone, the work having been executed by Mr. John Stringer, of Sandbach, whoso tender amounted to 5,910. The total expenditure, inclusive of fittings, &c., was £61,100 The shop on the left of the view was built at the same time, and from tho designs of the same architect.”