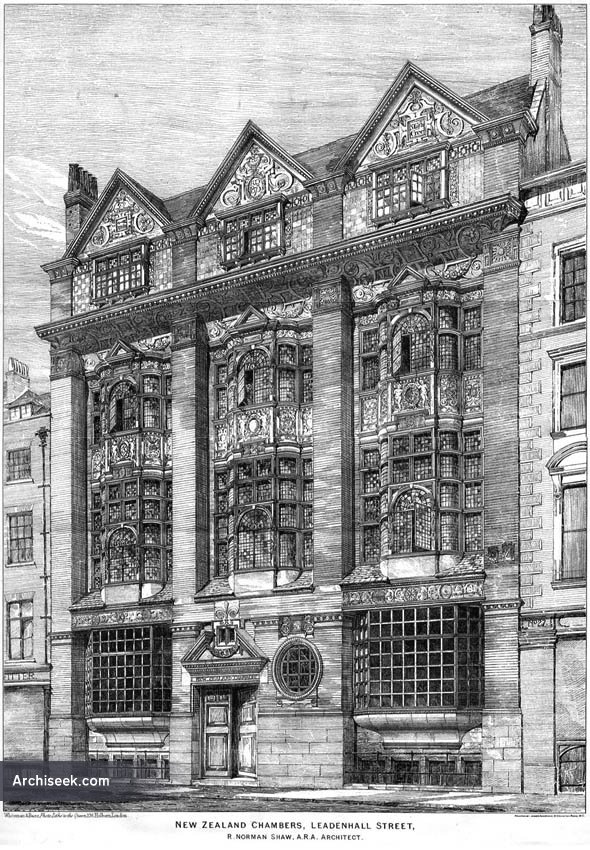 Demolished. From The Building News, September 5 1873: “We have the satisfaction this week of giving a doublr-page illustration of a characteristic and picturesque block of buildings in Leadenhall-street, built from the design of Mr. Norman Shaw, A.R.A. Whatever work Mr. Shaw does he stamps it with his own individuality. Like a true poet, he gathers up his materials from all tho ages, and moulds them into useful and symmetrical shapes for present and future necessities. We believe that this building in Leadenhall-street has been objected to by a few because it revives the architectural spirit and forms of a comparatively recent period of English history, and also because Mr. Shaw has had the boldness to depart from his usual style of designing. Those men who so object would wish a man always to work in the same groove, and reproduce, with certain modifications, the same outlines ; as we suppose they would like a poet all the better if he always wrote in the same metre. Just imagine such men as Browning, Tennyson, or Swinburne always writing in the same metre! It is only the man of imperfect culture and limited view who goes on day after day in the same jog-trot way. But he who is richer in ideas, and who possesses a stronger and more skilful hand, doeth that which seemeth good to him, with a comparative disregard of what his cotemporaries may do or say, and with a comparative indifference to what he himself did at another time and under different circumstances. Mr. Norman Shaw has done a good thing in Leadenhall-street. He has produced a spirited, well-balanced, pre-eminently picturesque, and useful building. 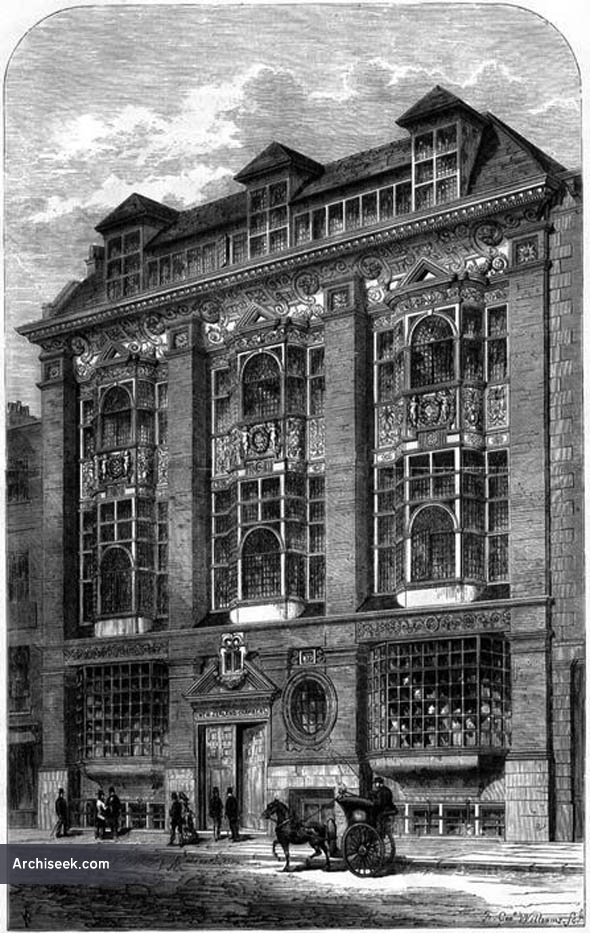 The general plan of the building consists of detached blocks, with corridors running through them, and a large staircase in the central block, giving access to the whole building. Tho front is built with Portland stone and cut and gauged Fareham bricks. The roof is covered with Staffordshire tiles, and the workmanship, as a rule, is worthy of the architecture. The work has been done by Messrs. Ashby and Horner, of Aldgate. The carving and modeling were executed by Mr. James Forsyth, of Edward-street, Hampstead-road.

The ground-floor of the back block of buildings, which is about 50ft. by 40ft., lets for 1,000′ guineas a year, on a 21 years’ lease; and other portions of the building are let in proportion. One reason why this sum is realised in the shape of rent is the care bestowed by the architect in providing light and air, and another is the characteristic picturesqueness of the building. A few more such lessons and capitalists will learn that good architecture will pay as well as please.”