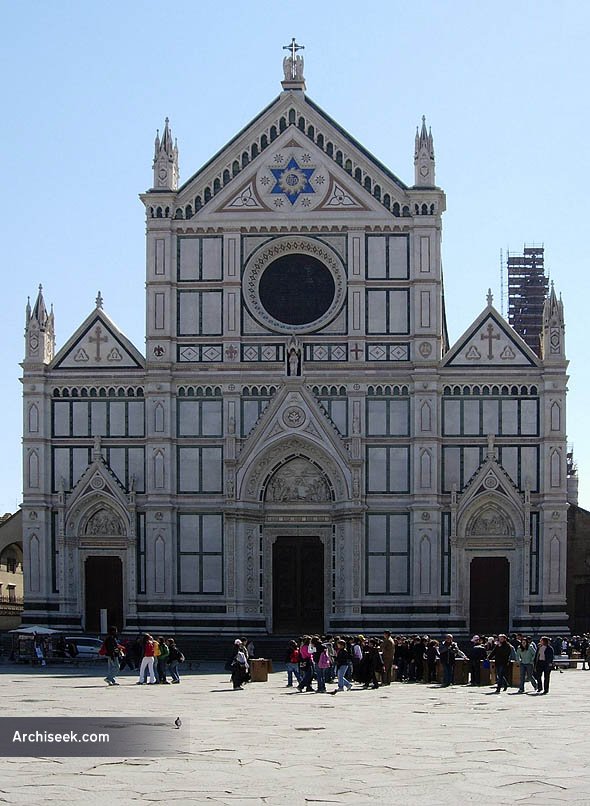 The Basilica di Santa Croce (Basilica of the Holy Cross) is the principal Franciscan church in Florence, Italy, and was constructed between 1295 and 1443 on the site of an earlier and smaller Franciscan oratory, built in around 1225-26, when the Saint was still alive, it was subsequently enlarged in 1252. Arnolfo di Cambio, the brilliant head architect of the City Council was entrusted with the new project and, almost immediately afterwards, the city also commissioned him to construct the new Cathedral and Palazzo della Signoria. The site, when first chosen, was in marshland outside the city walls. It is the burial place of some of the most illustrious Italians, such as Michelangelo, Galileo, Machiavelli, Gentile and Rossini.

The facade instead dates from the 19th century and was carried out by architect Nicolà² Matas between 1857 and 1863. A statue of Dante Alighieri, carried out in 1865 by Enrico Pazzi, stands beside it on the corner of the parvis that continues along Via San Giuseppe. The belltower is also recent: it was reconstructed by Gaetano Baccani in 1847-65 after the original one was struck by lightning.