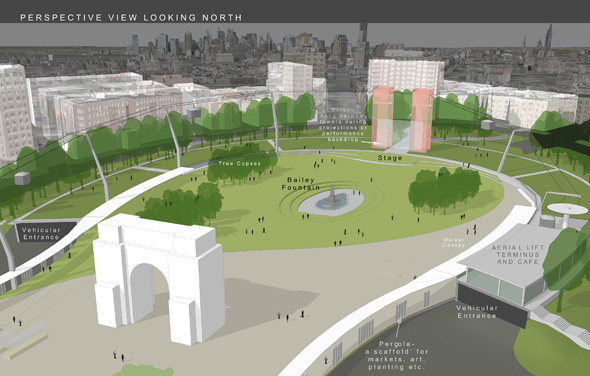 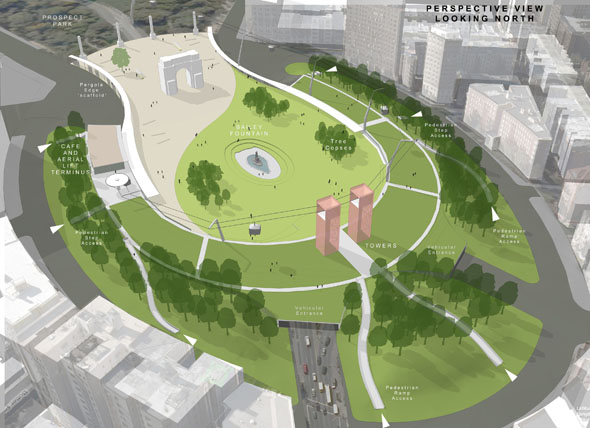 The Design Trust for Public Space, New York has announced the winners of the International architectural competition to reinvent Grand Army Plaza, Brooklyn, New York. A distinguished Independent Jury selected the winners from over 200 international submissions. Quilligan Architects of Dublin are the only Irish winners and will be attending the Award Ceremony in New York on the 12th September 2008.

The top 30 entries are on display from 12th September through to October 13th, in a major exhibition created by world renowned design firm Pentagram, which allows visitors to imagine the new plans while experiencing the the plaza as it is today.

“Brooklyn’s Grand Army Plaza is one of New York’s greatest unrealized assets”, says Deborah Maron, Executive Director of the Design Trust for Public Space. “Beginning the process of it’s reinvention with an ideas competition opened our minds to the range of innovative design strategies that could make the plaza more compelling as a destination and safer for pedestrians, motorists and cyclists”

Launched last February the competition encouraged entrants to create bold visions for the plaza’s redesign- from the feasible the fantastic-that express the spirit of Brooklyn today. Quilligan Architects entry was simply called- “˜Grand Army Plaza- Back to the People’ they took the approach that there are two fundamental elements required to win back Grand Army Plaza for the people of Brooklyn: Dealing with the traffic issue; Re-joining the plaza to Prospect Park.

Having done this, they turned to the issue of attracting people to the plaza by providing interest, activity, relaxation and a little excitement. Paul Quilligan explains “Our intention is to present a design that has unity and closely shows one space with various elements within it. When the traffic is removed from the space it can be seen that the arch is the most important element in the G.A.P. As a counterpoint to this dominant element we are proposing two glowing beacons which also form the structure for the cable car” 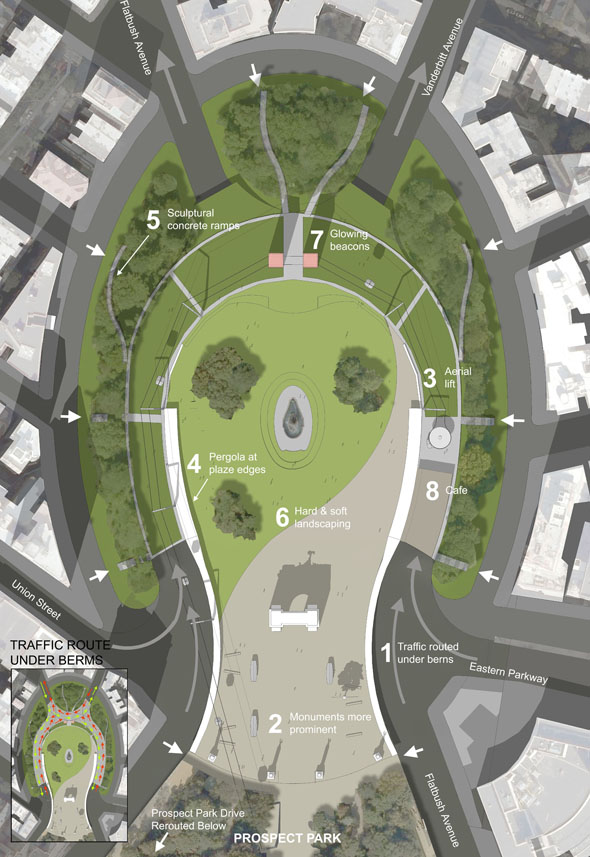 Elaborating further Paul explains a fundamental change was required to solve the problem of the chaotic traffic choked roads that encircle the plaza, “Traffic is roofed over at roughly the height of the berms. The various inter-changes required are provided in a covered traffic plaza below. Part of the berms are removed to achieve this but they are then extended over the cut and covered road system. The plaza can be then be reunited with Prospect Park and it becomes a design issue as to how this can be reinforced visually.”

The final element in the scheme is an ariel lift that unites the Plaza with Prospect Park “This is a fun idea and in practice will link G.A.P with all of Prospect Park. It will also include in the design a modern spectacular element with cutting edge design engineering. Two glowing beacons will provide the terminus structure for the cable car as well as a focal point in the surroundings. Also such an installation will draw people to the Plaza and bring all parts of Prospect Park into easy reach. The popularity of these installations make them self-financing. It will also contribute to the viability of other commercial elements proposed for the Park by drawing numbers to the Plaza i.e.- cafes, theatre, open air markets & other community activities.”

Paul sums up the winning scheme in saying “In conclusion we offer this design as a relatively simple way of returning Grand Army Plaza to the people of Brooklyn, providing them with a happy place with some useful attractions”