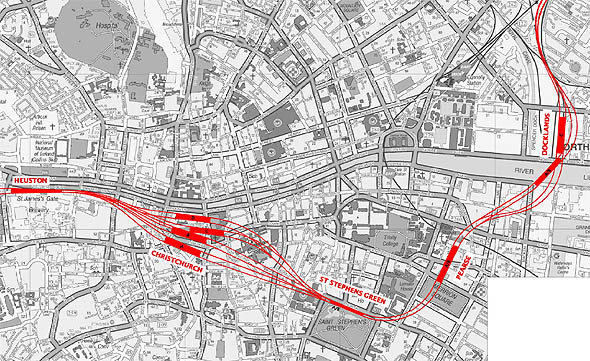 Iarnród Éireann’s planned underground link between Dublin Docklands and Heuston Station in Dublin would have almost twice the capacity of Metro North, featuring stations at the back and front gates of Dáil Éireann, according to details released by the company yesterday. In a presentation to the Institution of Engineers in Dublin last night, Iarnród Éireann revealed its “Dart underground” would feature 20 trains per direction per hour delivering a capacity of 70,000 passenger journeys per hour – significantly more than the capacity of Metro North, which envisages 36,000 to 40,000 people per hour. The company refused to say how much the project would cost yesterday, but when first mooted in 2003 it was costed at €1.3 billion. Sources indicated that it would now be in the region of €2 billion. As such it compares to the construction cost of Metro North. The 5.2km line would link up all rail modes, surface level Dart, Commuter, Intercity, Luas and metro through five stations at Docklands, Pearse St, St Stephen’s Green, Christchurch and Heuston Station. Docklands Station is to be located north of the Liffey with an entrance at Spencer Dock’s central square, while the Pearse underground station will have new entrances from the existing station and a new Trinity College development to the east.