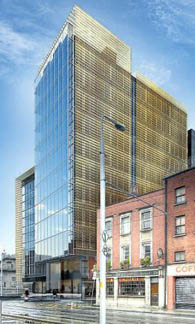 A major row is looming after plans were submitted for a gargantuan tower that would dwarf the historic Four Courts. The capital’s former motor taxation office is to be replaced by an 11-storey office tower that will rise up behind the Four Courts buildings. Dublin City Council has given the green light for the building, aimed at providing a “beacon” for the regeneration of the area. The 1970s-built motor tax office will be demolished to make way for the new block on the Luas line at the corner of Chancery Street and Greek Street. One opponent objected to the building’s height — at least as tall as the Four Courts’ landmark dome. Others feared the amount of traffic it would generate, as well as potential overshadowing of nearby flats. The developers, Linders of Smithfield, have not yet identified future tenants of the scheme, but anticipate they will be mainly related to the area’s court activities. It is expected to house up to 450 workers. The ground floor will be given over to commercial services and there will be 21 parking spaces in the basement.

In its decision, Dublin City Council said the site had a critical role to play in the future sustainability of the wider city centre and the building would help consolidate an “under-performing” area. “The planning authority is of the opinion that the proposed development … provides for an appropriate mixed-use development of the highest quality that balances the recognised needs for retail/commercial spaces at this sensitive historic location,” the council stated.