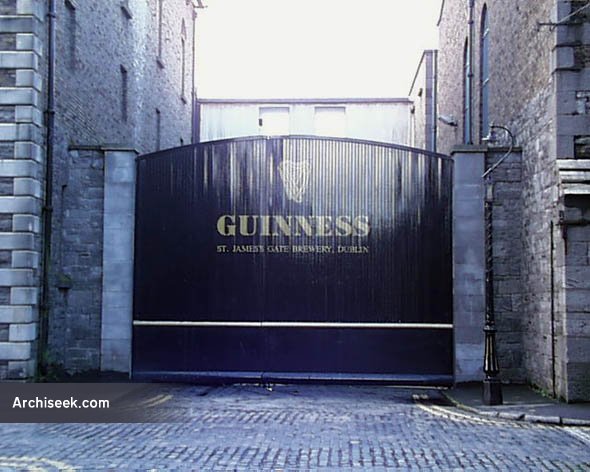 The sights, sounds and smells of the Guinness brewery at St James’s Gate in Dublin have been part and parcel of the Liberties for nearly 250 years – ever since Arthur Guinness himself first secured a 9,000-year lease on four acres of ground in 1759 for an annual rent of £45, including water rights. The brewery has expanded substantially since then and now occupies 64 acres on either side of Thomas Street, stretching down to Victoria Quay on the River Liffey. It was from here that the Guinness barges transported kegs of stout downriver to the Lady Patricia and Lady Gwendolyn, moored at City Quay. The vast brewery has its own theatre and swimming pool, as well as the tracks of a narrow-gauge railway that once served the site. It still has its own power station to fuel the production of over 50 million barrels (nearly 83 million hectolitres) of beer – including Guinness Extra Stout, proudly brewed at “James’s Gate Dublin”. At one stage, the brewery employed as many as 4,000 people and, although the number has fallen to a fraction with the onset of automation, Guinness remains the largest employer in the Liberties – but that’s now likely to change. The inner city lost Jacob’s biscuit factory, the Powers and Jameson distilleries and many other traditional industries, and now St James’s Gate is to be “consolidated”, with a new brewery to be built on a greenfield site.