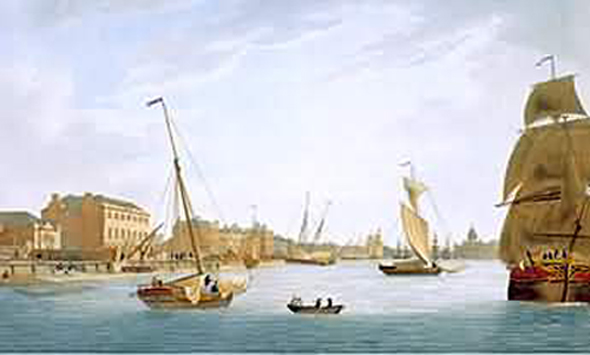 A resolutely romantic relationship between port city and its waterfront is captured in Malton’s The Marine School, which hangs in the National Gallery of Ireland. It’s an image we cling to and we reproduce in thousands of prints and posters and postcards, in spite of rapidly changing commercial realities. Nothing unusual in this, according to Dr Cindy McCreery, who noted, in a study of paintings with the British National Maritime Museum, that our interpretations of ports have long reflected the “ideal”. In fact, engravings or prints of original works could be perceived as a form of public relations by the very nature of the wider audience they reached, she suggested. This representation varied – from busy commercial hub to military target, from centre of civilisation to lonely outpost in a troubled colony. In providing both access to, but also protection from, the marine environment, ports symbolised “man’s desire for exploration, trade, war and contemplation” and provided fruits for “investigating the complex history of man’s relationship with the sea”. Niamh Moore hasn’t dared to undertake such a bold challenge, but she does touch on several aspects of this complex relationship in an Irish context as part of her research on recent changes in Dublin’s docklands. The emphasis is on “recent”, for she makes clear at the outset that this is not a comprehensive history. Significantly, it is the fourth in a series of geographic perspectives on the making of Dublin city, edited by Dr Joseph Brady and Prof Anngret Simms of University College Dublin.