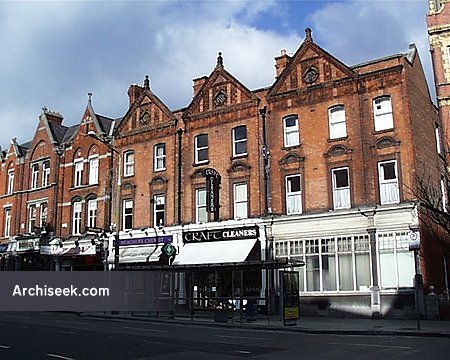 Dublin’s Baggot Street is a most interesting architectural curiosity, with the two parts of the street dating from different periods. Lower Baggot Street is fundamentally Georgian, while Upper Baggot Street is mostly Victorian. These separate architectural styles live on, despite large-scale developments over the past three decades. Lower Baggot Street has been home to many professional practices – mostly doctors and solicitors – for many years. A century ago, 126 Lower Baggot Street housed the Baggot Street private hospital, as it still does. The H. Williams grocery shop was flourishing in Lower Baggot street 100 years ago. Today Tesco is trading there, with the Sunday Tribune newspaper on its upper floors. In the late 1960s, the Bank of Ireland caused great controversy when it proposed demolishing a whole row of Georgian houses, some of which had once housed the Lincoln & Nolan motor company, to build office blocks. Before Lincoln & Nolan, the premises had been occupied by Thomas Dennehy’s coach-building works; the transition from horse-drawn to horseless carriages had been made in the earlier 20th century.