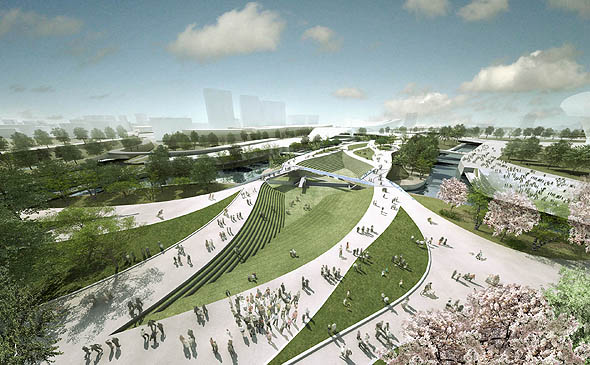 The planning and design of the bridge will integrate both Games and legacy use. During the Games the bridge will have a total width of 55 metres to accommodate increased spectator numbers. After the Games temporary sections of bridge will be removed leaving two narrower bridges that span either side of Carpenters Lock, a unique 1930’s historic structure on the River Lea Waterway. 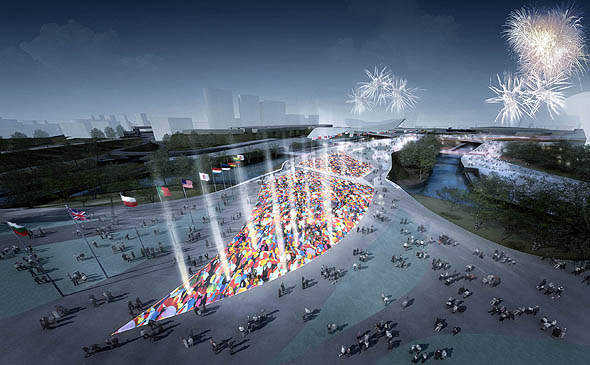 A key requirement of the design is that its surface area has to be reduced significantly after the games are over. Heneghan Peng’s concept designs were praised by the design jury for making the bridge a spectacle in Games mode by using the landscape for colour and activity followed by the transformation of the structure in legacy to leave two footbridges linked by a central blade-like walkway offering views over the river and Carpenters Lock. Removing the surface after the games will reveal a grass amphitheatre which will allow access between the elevated pathways and the waterway.

The design jury was particularly impressed with the way Heneghan Peng’s concept designs brought together a design solution that worked for both Games and legacy. The short span of the footbridge gave Heneghan Peng scope to develop a more creative design than a usual bridge structure by using the surrounding landscape as a way of shaping the bridge structure itself.

The jury also praised the proposals to open up the Carpenters Lock area, creating new meeting spaces, views and links above and below the bridge between the river tow paths, Carpenters Lock and the upper concourse in the Olympic Park.

Directors of Heneghan Peng Architects, Roisin Heneghan and Shih-Fu Peng, said: “We are thrilled to have won this competition particularly after being faced by such incredible opposition. We hope that our design will form an important element within the spectacle of the London 2012 Games and as a striking element of the enhanced connections the Olympic Park will create in legacy.” Other shortlisted firms included McDowell+Benedetti, Ron Arad Associates and Future Systems. Heneghan Peng Architects have a good track record in competition having won competitions to design the Grand Egyptian Museum at the Pyramids of Giza in 2003, and the visitor centre at the Giants Causeway in 2005.

ODA Director of Infrastructure and Utilities Simon Wright said: “The winning team impressed the design jury with their understanding of the need to plan Games and legacy together. Their designs will help us lock-in legacy now by designing a bridge that meets Games-time needs but which also leaves behind a striking structure in the heart of the Olympic Park for future generations to enjoy. The jury were impressed with all of the shortlisted teams but Heneghan Peng’s designs emerged as a clear favourite and will help us ensure we continue to aim for the highest standards of design excellence across the project.”