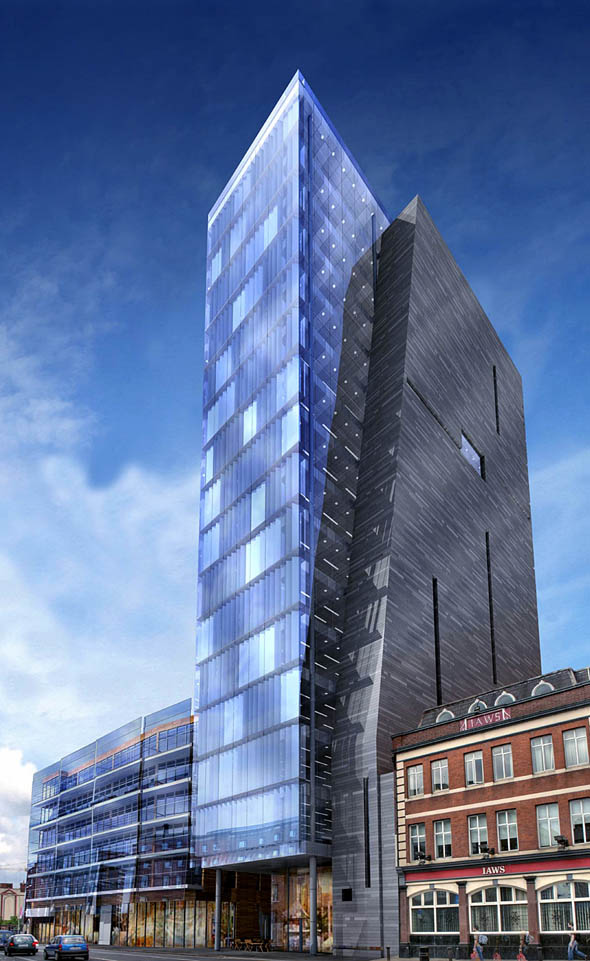 An Bord Pleanála has rejected two landmark high-rise schemes proposed for adjoining sites in the Digital Hub in Dublin’s Liberties. Both sites were to be part of a new cultural quarter called SoHo, with a creative corridor along Thomas Street, as well as a new urban civic space around Cornmarket. Manor Park Homebuilders lost its first party appeal to An Bord Pleanála to build a massive commercial, residential and leisure scheme with two slender glazed towers, the tallest of which would have been 56 storeys (or 171ft) – three times the height of Liberty Hall. An Bord Pleanála said, while it supports the development of a Digital Hub in this part of the city, it refused permission on the grounds of excessive height (ranging from 11 to 56 storeys), the scale of the development and the “unsatisfactory nature and form of development based on a podium with full site coverage” which would not be in keeping with the historic character of the area. Designed by de Blacam and Meagher architects, the second tower would have been 124 metres (409ft) and would have comprised 32 storeys of offices. The proposal was for a 81,179sq m (873,803sq ft) development to front Thomas Street West, Crane Street and Rainsfort Street, and including 38,398sq m (413,312sq ft) of offices, a 360-bed hotel with 85 apart-hotel units overhead, 6,038sq m (64,992sq ft) of retail and café/restaurant space, a bar, public areas, 125 apartments and an educational resource centre. In addition, permission was also sought to change the use of VAT House No 7, a former Guinness facility, to office and bar use.