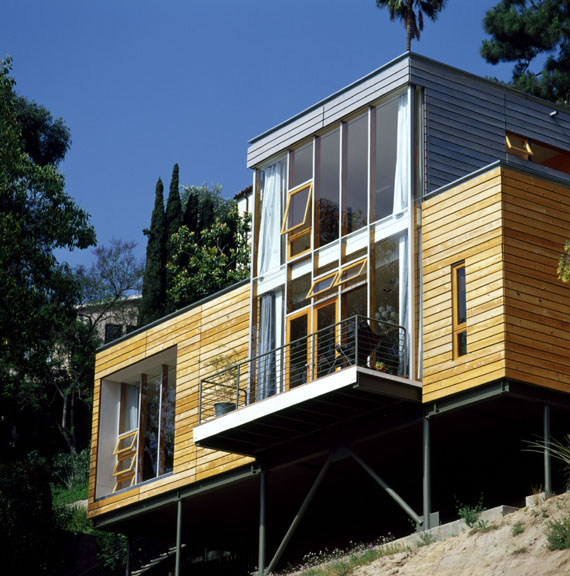 Los Angeles has always been a place where you could experiment. Generations of architects have been drawn to the West Coast, where they found freedom from the usual cultural, formal and contextual constraints. Frank Lloyd Wright went there to build in a new way, as did RM Schindler and Richard Neutra, both Viennese, who brought a sensibility that would shape everybody’s vision of southern California living. “Their influence, and that of later designers, such as John Lautner and the pioneers of the post-war Case Study houses, is still strong,” says Lorcan O’Herlihy. Yet LA remains a place where, as he puts it, the story isn’t written.

O’Herlihy has contributed a few notable chapters of his own to LA’s greatest architectural adventure: the single-family house. His designs feature regularly in books of the world’s best houses and of a dozen included in the most recent guide to Los Angeles architecture, two are his. If there is a signature Los Angeles School today, it is one devoted to sculptural, form-driven architecture and Frank O Gehry is its dean. O’Herlihy’s work is not formally driven, however. His hillside houses are complex assemblies of simple rectangular forms, partly anchored to the slope and partly floating above it. Deliberately multifaceted, they are rarely amenable to the architectural photographer’s “hero shot”.

As if protesting against the way in which architectural modernism has been turned into a commodity – packaged, bought and sold with greater enthusiasm in LA than anywhere else – his houses are more often than not clad in a range of cheap and basic materials: plaster, plywood, cement boards and timber sidings. But if there is a single material that distinguishes O’Herlihy’s houses from those of other architects in the region, it is his use of translucent cast glass from Europe. The material, shaped into self-supporting U-shaped planks, has been around for decades but it has recently found a new home in the sun in southern California, where it provides a cool aqua light to many of O’Herlihy’s interiors.

“I am more interested in Euclidean geometry and how materials technology can be exploited to push the envelope,” he says. “My work is different from the LA School, probably because I grew up in different cultures and have always been interested in what’s going on in Europe.” He ran a unit at the Architectural Association in London in the mid-1990s: Dubliner John Tuomey was one of his external examiners.

Lorcan’s father, the actor Dan O’Herlihy, studied architecture in University College Dublin – where he was a contemporary of Kevin Roche, the painter Pat Scott and Wilfrid Cantwell and Kevin Fox, who led Michael Scott’s team that designed Busáras – but he never practised as an architect. Instead he joined the Abbey Theatre before making Odd Man Out for Carol Reed and moving to Hollywood in the late 1940s. In 1954 he was nominated for an Academy Award as best actor in a leading role – for Luis Buà±uel’s Adventures of Robinson Crusoe – but lost out to Marlon Brando, for On the Waterfront. The other nominees that year were Humphrey Bogart, Bing Crosby and James Mason. Among the last of his 64 feature films were John Huston’s The Dead and RoboCop. [Dan O’Herlihy died on February 17, after this article for Culture went to press.]

Lorcan was born in Dublin in 1959, but the family moved to California before his first birthday, returning to Ireland when he was seven. “Dad was working in Europe at the time,” he says, “so Dublin was our base. They were the most formative years of my life.” He went to school here before returning to LA at the age of 16.

After studying architecture in San Luis Obispo, California, O’Herlihy moved to the East Coast in the early 1980s, where he worked for several years for his father’s old friend, Kevin Roche, on an extension to the Metropolitan Museum in New York and for IM Pei on the Louvre, Paris. Unsure of himself, he quit architecture for 18 months and painted in a loft, then went to work for Steven Holl, the architect who influenced him most.

The impact of his time working on Holl’s celebrated mixed-use Hybrid Building in Seaside, Florida, can be seen in O’Herlihy’s first house, which he designed for his parents in Malibu in the late 1980s. It was here that he met his Dublin-born wife, the actor Cornelia Hayes O’Herlihy, when she dropped by for lunch with his father soon after moving to LA in the early 1990s.

O’Herlihy has spent most of his life surrounded by veterans of Hollywood’s cut-throat screen trade (his brother Gavan is an actor and his uncle Michael was a television director whose 30-year career included the classic series Gunsmoke, Hawaii Five-O and Miami Vice). But that was scant preparation for the firestorm that broke out two years ago over his plans for a residential development on the plot adjoining the iconic Schindler House, built on Kings Road, West Hollywood, in 1922.

Designed, as the English critic Reyner Banham wrote, “as if there had never been houses before,” the Schindler House broke decisively with tradition. RM Schindler, its architect, said it “fulfils the basic requirements for a camper’s shelter: a protected back, an open front, a fireplace and a roof.” The thin concrete walls were cast on the ground and tilted up into position. There were sliding canvas doors, like shoji screens.

This is the birthplace of the modern California house, the site where its vocabulary was established – single-storey, turning its back on the street, flat-roofed and having an open plan with sliding doors to the garden. But the Schindler House was more than that. For 30 years it was a salon for the for the pre-glitz Hollywood intelligentsia. It was also a utopian experiment in communal living. Two couples – the Schindlers and, for a while, the Neutras – shared the house, hidden behind high hedges and walls of bamboo.

There was a double garage and a communal kitchen, four large studios-cum-living-rooms – one for each adult – and no bedrooms. Instead there were open-air “sleeping baskets” on the roof, under canvas awnings. The lawn was their living room, with an outdoor fireplace.

In 2002, the house – now a museum owned by Friends of the Schindler House (FoSH), a non-profit organization, and run in association with the Austrian Museum of Applied Arts (MAK) – was placed on the World Monument Fund’s list of 100 most endangered sites.

Because his work draws inspiration from Schindler and Neutra, O’Herlihy won the commission for the adjoining 100ft-by-200ft plot occupied by a 1936 American colonial house. “The Schindler House almost prototypically embodies the modernist development in the US with its specific understanding of individualism, the city, society and nature,” says Peter Noever, CEO and artistic director of MAK Vienna. “Building in such a neighbourhood means to take on a responsibility, to be ultimately answerable to architectural history itself.”

O’Herlihy says he can’t think of anything more provocative than tackling the issue of density today. There is a paradigm shift underway in LA: multi-family housing is a new driving force in architecture, due to escalating land values, as house prices have doubled in the past three years. He set out to rethink contemporary conventions of housing in LA – to offer new lifestyles in West Hollywood, the third most densely populated city in California.

Developed in consultation with FoSH and MAK, his thoughtful design of 18 dual-aspect apartments, called Habitat 825, was kept a third smaller and about 20 feet lower than would have been permitted by zoning regulations, in order to be a good neighbour and stay below the bamboo separating it from the Schindler House. “Our courtyard housing, without corridors between units, is all about trying to bring light, and not a box, next to the Schindler House,” he says.

It was not enough. In February 2003 MAK claimed the proposal would dwarf the residence, creating “a canyon effect” and “seriously disturbing the already fragile balance between the house and its context.” Fearing that “in 10 or 15 years they’ll say these idiots from Vienna were very careless,” MAK invited 53 architects from around the world – including O’Herlihy, incredibly – to submit alternative visions for the property, to “preserve Schindler’s paradise and find a cultivated way out of the forbidding situation.”

Twenty concepts were received. Gehry sat on the jury, which preferred three concepts – by Odile Decq, Peter Eisenman and Zaha Hadid. At a public roundtable discussion in August 2003, audience members expressed surprise that one of the three premiated proposals – Hadid’s – was for a 21-storey tower. Judith Sheine, a FoSH board member, said: “What’s so difficult for some of us is we understand reality, and we don’t want to upset the developer and O’Herlihy because they are trying to make a good-faith effort. But the competition is trying to make a bigger point. If the competition causes us to think about the way we do historical preservation in LA – not just the buildings, but the context – we will have accomplished a lot.”

“You have to take things head on,” says O’Herlihy. “The MAK project was published everywhere. It kicked my level of exposure up a notch. And Schindler’s son came up to me and said: ‘It’s great – my father built apartments in this town.'” In 2004 the Architectural League of New York chose O’Herlihy for its prestigious Emerging Voices programme. When the planning hearing eventually took place, West Hollywood’s planning commissioners voted 6-0 in favour of granting the permit. Construction finally began last month.

In the meantime, two houses – the Vertical House and the Jai House – completed during the controversy may be O’Herlihy’s best yet. “Each site drives the project,” he says. “LA is a horizontal city, but the freeways are now clogged. The car has consumed the city for so long. There are now lofts in downtown. People are going back and building higher, they are looking for a city lifestyle rather than a suburban one. My own home is a piece of urban infill.”

The Vertical House (originally christened Túr àras), occupying a tight site in Venice, California, is a taut, kaleidoscopic tower that blurs boundaries between walls and floors. Clad in multicoloured fibre-cement boards, the flat facades are punctuated by 105 windows.

The Jai House, overlooking the Santa Monica Mountains, is experimental in the way the best houses in southern California have always been – driven by creative clients building their own homes. A prototype indoor-outdoor house, it tips its hat to the Case Study houses, nevertheless. It was even photographed by Julius Schulman.

“People here are increasingly conscious of the risk of melanoma,” says O’Herlihy. “Life starts after 5 pm; between 5 in the evening and 8 the light is magnificent. We try to stay out of the sun but we still want an outdoor life. So the 75-foot lap pool enters the living room, you have to go outside to the get to the bedrooms and there is an open-air movie theatre on the roof.”