Were 3W the architects the DDDA were looking for?

On October 1st, Irish-architecture.com motivated by the ongoing debate regarding the official winner, circulated a request to its mailinglist subscribers and the readers of affiliated websites for entries to the U2 Landmark Tower competition. In particular we were interested in entrants who had not been contacted by the auditors of the competition – PriceWaterhouseCoopers (PWC) or by the organisers the Dublin Docklands Development Authority (DDDA).

We had previously published unsuccessful entries for the competition online and were anxious to trace any entrants who may have been the elusive original design selected – which escaped the auditors or indeed had been wary of contacting the auditors. And we found a few, one of which in particular set the alarm bells ringing – a design by 3W Architects from London.

Why were the auditors involved?

From the announcement of the winners Burdon Dunne Architects / Craig Henry Architects on August 8 there was controversy about the result, mainly to do with the design of the winning entry. But an article by Frank McDonald in The Irish Times of September 4 threw new light on the competition.

“It is likely that a substantial chunk of the €500,000-plus in entry fees raised by this competition went to PriceWaterhouseCoopers, who were called in to carry out a “due diligence” exercise after some of the leading contenders could not be identified, including – incredibly – the one that the jury had picked as the winner.

As part of this exercise, all of the entrants were requested to submit digital versions of their schemes, to aid efforts to match drawings with names in the mountain of material that the competition generated. But even this stratagem did not resolve the issue because no entry form could be found for the one chosen by the jury.

To this day, nobody can say for certain who the original winner was – so some architect, somewhere in the world, has missed out on a prestige commission due to incompetence on the part of the organisers. And Dublin will never know what might have been erected at the end of Sir John Rogerson’s Quay.”

When asked by Irish-architecture.com for a comment on this story, Peter Coyne, head of the DDDA replied (on September 15) “We are in touch with the Irish Times in connection with the article. I can say, without equivocation, that there was no administrative or other error on the part of the Authority which affected the outcome of the competition and specifically we did not lose any application forms as suggested. I want to stress that the winning consortium is the true and valid winner and that they won it “fair and square”. I would request that the issues raised erroneously were not given any further airing at all as they are damaging, not only to the Authority, but to the winning architects who deserve congratulations not innuendo.”

On September 21, The Sunday Times followed up with two articles on the controversy: “A mystery architectural firm was the original winner of the prestigious contest to design a studio for U2 in Dublin’s docklands. The design, a rectangular building from which emerges an elegant tower, was the first choice of the seven-man jury that included Adam Clayton, the rock band’s bass player. The contest was jointly sponsored by the Dublin Docklands Development Authority and U2. However the jurors were forced to abandon their initial choice because they could not identify its author.”

The DDDA hired PriceWaterhouseCoopers to locate and identify the winning architects. As one contestant explained to Irish-architecture.com “When I was contacted by PriceWaterhouseCoopers, they specifically requested that I only email them the narrative portion of the submittal. At the time I thought that the request was highly irregular – given the ‘blind’ judging criteria for the competition”

Another firm deegan + goodrich put it “We were contacted by phone from Price Waterhouse regarding our entry. They called on two consecutive days, they seemed a bit odd and pressing to us. The first message was asking us to submit our written statement that we included with our entry, nothing else. The second day they called and reminded us that they needed the information immediately, had we sent it to them? We had already sent them the message and asked that they confirm receiving it, since they left us an email address by phone message. They did not confirm our message to them. Not sure how they would use the statements to link to the drawings…..nothing from the statement was allowed on the board per the ddda “rules.” This seems like a very ineffective, almost impossible, way to go about it.”

According to French entrants Boutan Garcia Gomez, “We received, at the end of July, a letter from Price Waterhouse Cooper telling us that the organisers had unsuccessfully tried to contact us. They were asking us to send them a copy of the written report we had to submit for the competition. We did so by e-mail, but our e-mail was returned to us with an explanation saying that the address was wrong. We tried a couple of times again with the same result. As we were quite busy at that time, we did not try to send the report by mail or to call them. So they did not have any answer from us.”

In short, the competition procedures were a bit of a shambles. 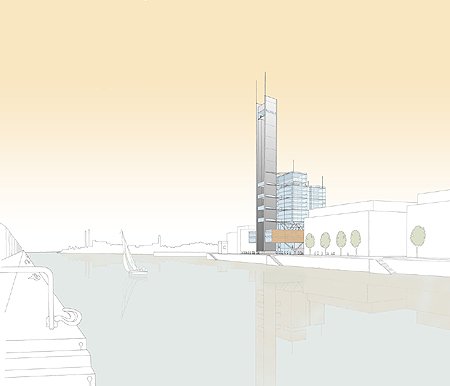 “The design, a rectangular building from which emerges an elegant tower, was the first choice of the seven-man jury……”

According to Shane O’Toole in The Sunday Times, “the entry displayed a remarkable knowledge of Dublin and of the docklands’ topography and bore all the the hallmarks of an Irish practice: the suspicion was that the entry was purporting to be something it wasn’t”. One of the architects in the studio of 3W, a London based firm, Andrew Wells had spent some time working in Dublin and was very familiar with the topography of the docklands. Their written statement which accompanied the design shows that familiarity. Stuart Walker of 3W says that their entry was hand-delivered and they have a signed receipt from the DDDA for it, “Everything was double and triple checked the fee was sent in cash”.

Even after the DDDA brought in PWC to contact all the entrants, the firm responsible could not be located. According to Stuart Walker they were never contacted by the auditors PWC – in fact they heard nothing more from the competition organisers after their initial entry.

We contacted the DDDA and the jury members with the report and illustrations of the 3W entry. Paul White PR spokesman for the DDDA reiterated that there was only ever one winner of the competition Burdon Dunne Architects / Craig Henry Architects. As yet, this is the only reply received by Irish-architecture.com in response to our emails.