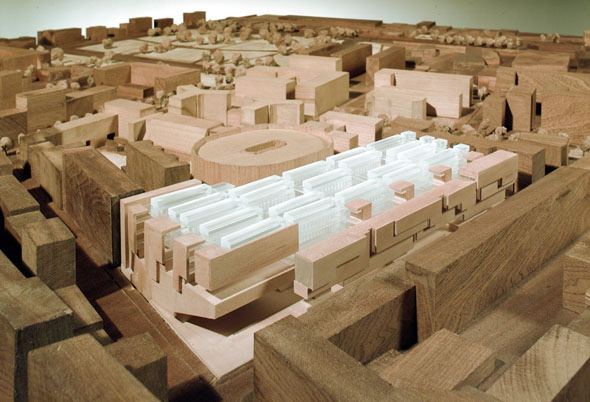 More often than not there is a grudging, occasionally bitter, tone to the architectural grapevine. Not without reason do we joke that a “jealousy” is the collective noun for a gathering of Irish architects.

However, the tone has been different in recent weeks, as news has spread of Grafton Architects’ success in winning the international competition to extend Milan’s Luigi Bocconi Free University, known simply as Bocconi. Joy has genuinely been unconfined. There is a palpable sense that the Graftons have achieved an important first for Irish architecture. Where they have led, others will surely follow.

The best architectural work world-wide is awarded through invited competition. Until recently, Irish architects have been singularly unsuccessful at getting onto the all-important shortlists of competitors, a fact that will change only when our architects and their architecture earn accolades abroad.

Grafton delivered a significant calling card 18 months ago when the firm’s founders, Yvonne Farrell and Shelley McNamara, were invited to teach with Kenneth Frampton – the doyen of architectural critics and Ware professor of architecture at Columbia University, New York – at one of Europe’s newest schools of architecture, at Mendrisio in the Italian-speaking Ticino canton of Switzerland.

Milan’s Bocconi, which celebrates its centenary this year, is a research university of international standing in the fields of business, economics and law. It was the first in Italy to award degrees in economics and business administration. Founded in 1902 by Senator Ferdinando Bocconi in memory of his son Luigi, who had died fighting on the Italian side in the battle of Adua, Ethiopia, six years previously, the university was born of private initiative, in what it recalls as “an act of love resulting from sorrow.”

Since 1940 the university has been located in the southern part of Milan, next to Parco Ravizza and behind the remains of the Spanish walls. Bocconi’s campus has grown over the decades and is now an entire neighbourhood within a residential and commercial district.

The Bocconi 2000 architectural competition was launched last October to find a design for conference and lecture facilities – including a 1,000-seat aula magna – for 2,500 people and research offices for 1,000 professors and postgraduate students. The 10 competing practices included three invited from Italy, two from Spain and one each from France and Norway, as well as two leading Swiss firms, Diener & Diener and Aurelio Galfetti, who also teaches at Mendrisio.

At the end of January, following what McNamara describes as the “toughest-ever interview”, the competition jury – chaired by Frampton – unanimously declared Grafton’s design the winner, saying it “presents from the start a meaningful and right relationship between the immediate external urban context and the internal context of the university.”

The jury’s citation highlights two aspects of the design, which it calls fundamental: “firstly, the creation of a large, paved, public foyer on the lower level of the building, lit from above and accessible both from Viale Bligny and Via Roentgen; secondly, the strategic positioning and orientation of the aula magna at the junction of these two streets, giving an immediate view of the 1,000-seat hall and its foyer from the piazza at Porta Ludovica, a symbolic entranceway to the university.”

Bocconi has a pedigree of commissioning fine architecture. The first building on the campus was designed by Giuseppe Pagano, editor of Casabella and one of the most important architects of his generation. A decorated hero of World War I and an ardent fascist since 1920, Pagano joined the resistance in 1942. Arrested and tortured, he died on April 22, 1945 in the German concentration camp at Mauthausen.

His building on Via Sarfatti is thoroughly modern – a model of Italian rationalism: ordered, rigorous and perhaps even a little arid. Pagano believed that his work “could demonstrate the civil ‘atmosphere’ that really up-to-date urban planners should aim for in every corner of our cities, both large and small.”

McNamara calls it “muscular – heroic and lean, like Busáras.” Grafton’s work is sympathetic to the rationalists but where Pagano – unlike Terragni – accepted expressive limitations for the sake of creating a modern architectural language, they overlay bare prose with lyricism. Much of the poetry of Grafton’s Bocconi 2000 design derives from how they have handled the meeting of two different worlds. The competition brief suggested that almost one-third of the complex’s 45,000 square metre area should be underground.

“We found that challenging,” recalls McNamara. “We hadn’t done that before. We decided not to think of the ground as a datum dividing the accommodation into two parts – one dark and needing ventilation, and the other in the light.

“Our starting point was an idea about ground and sky,” she says. “We thought of the base of the project as a piece of landscape, an erupting landscape, a carved platform with deep cuts provided to light the basement. We wanted to make a continuity of the ground of the city with the ground of the campus, by having this thing in between them. Overhead this undulating surface we thought of the offices as being like an inhabited roof.”

Inspiration came from a building near Milan’s Duomo – Il Broletto, a medieval building that was used as a civic hall and market. “The university, too, is like a place of exchange,” adds McNamara. “We wanted to use the offices to make the roof of this place of exchange.” Grafton’s early models explored how the offices might become light filters – inhabited louvres – lighting the ground floor below.

The aula magna, which the architects describe as “a window to Milan”, is placed hard against the artery of Viale Bligny, with its clatter of trams and rushing traffic, to announce the university’s presence. McNamara likens the street to Dublin’s Talbot Street or Dorset Street, with jumper shops and mattresses and bedding for sale. “The floor of the city is fantastic,” she says, “surfaced in thick stone.”

The great room of the aula, with its dramatic, cantilevered wedge of seating – reminiscent of Russian constructivist workers’ clubs of the 1920s or James Stirling’s British university designs of the 1960s – becomes an anchor for the design, an embedded boulder, whose upper reaches invade the roofscape for light and air.

Milan is a city of tough exteriors and friendly interiors, says McNamara. Around the corner, the hard, overlapping shells of a thin, new library stretch 150 metres along Via Roentgen. The library – set well back to create a lively public space like the one in front of the law school at Milan’s Spidale Maggiore, with its wide pavement and bicycle stands – “floats” above the entrance, as if hanging.

The library’s 10 suites serve Bocconi’s 10 research departments. Slotted together like a Rubik’s cube, each is a different size. Suites occupy the same area on plan but vary in height between one and three storeys. Access bridges cross the voids between the library on the street and the serried banks of transparent departmental offices, interwoven with courts and gardens, that make up the complex’s glassy roof – all of which is miraculously slung beneath massive beams.

Italy has long had a reputation as a graveyard for competition-winning designs. Not this time, it seems. Site-enabling works will begin later this month and the privately funded, €57 million project is due for completion in June 2005.

Bocconi is equal in size to the other eight or nine projects Grafton has on its books, on the east coast, Galway and Donegal, but it may be easier to administer: it is possible to fly to Milan in two and a half hours. What a surprise to realise that Dublin is “closer” to Milan than Milford.