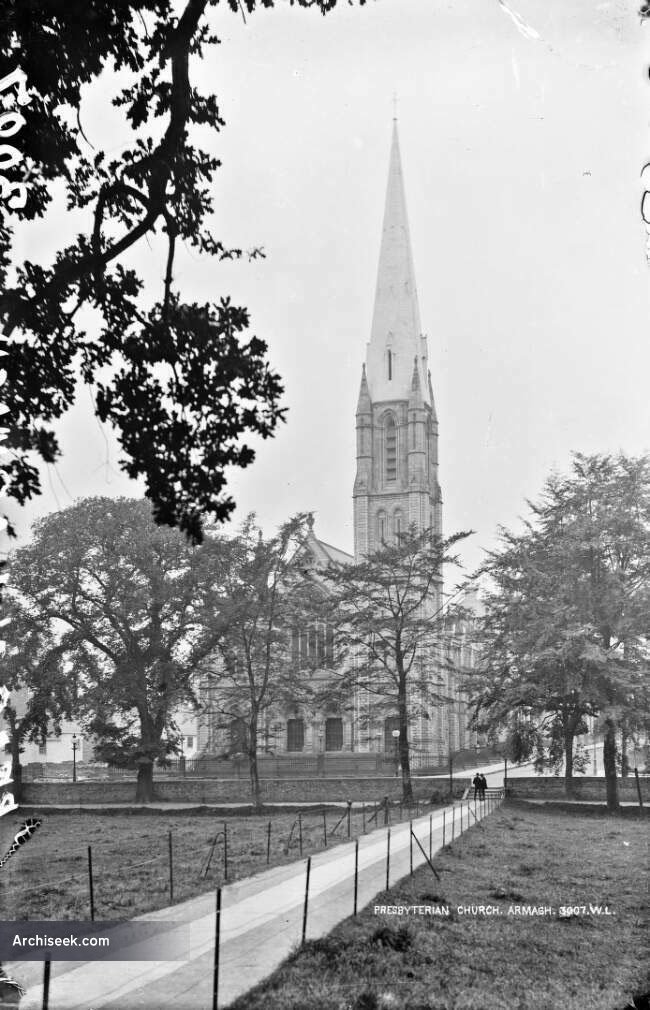 “On the 4th inst the ‘memorial-stone’ of the new church now in course of erection at Armagh, for the First Presbyterian congregation, was laid by Charles E. Lewis, Esq., M.P. The edifice stands at the junction of Russell-street with the Mall, the principal front overlooking the latter. While following the general features of the English Gothic of the fourteenth century, the plan and leading arrangements have been designed especially to meet the requirements of modern churches where hearing and seeing are of the first importance. The church consists of a nave and two side aisles, making a total width of 55 ft. within the walls. The columns of the aisles are of cast metal, of large dimensions.

As an aid to the acoustic properties of the church, boarded ceilings will be introduced throughout. Sittings are provided for 470 persons on the ground floor, and the galleries accommodate 350. These latter are approached at either side by staircases, having separate entrances, but connected with the main vestibule. Owing to the difference in level between the Mall and Russellstreet, a basement is formed below the church, which will be utilised as a sexton’s dwelling, and for other purposes. The sills of the four main doorways facing the Mall are approached by a spacious flight of steps, giving dignity to the appearance of the church.

These doorways are deeply recessed, and have jambs with nookshafts, with moulded caps and bases. The arches above these are acutely pointed and richly moulded, with carving freely introduced. The central doorways are surmounted by canopied and crocketted hoods, w’hich start from angled buttresses, terminating in cusped and floriated finials. The five-light traceried window in main gable is deeply moulded with nookshafts, and arches enriched with ball flowers and other carving. Above this window a traceried opening admits air into the upper part of roof. A crocketted terminal surmounts the gable at a height of 70 ft. The gable of the aisle adjacent to this has a double light window filled with tracery, and also terminates in a finial. Octagonal turrets are placed at each angle of the building, with the exception of that at the junction of Russellstreet and the Mall, where a massive pinnacled tower rises to a height of 100 ft. to the belfry. From this stage rises the spire, with tiers of lucarnes on each face, finishing at a height of 180 ft. in a lofty weather vane. The side elevations of the church have two tiers of windows between boldly projecting buttresses, rising above eave cornice with cusped and canopied spirelets. The lower windows are coupled with trefoiled heads and pointed labels, while the upper are lofty, and filled with tracery of elaborate character.

Two of these latter are placed in the back of church. An additional entrance is provided from Russell-street of similar character to the main doorways, but on a level with the street. The exterior walls are built of shoddies of Armagh limestone, with dressings of Dungannon sandstone. The windows throughout the church are filled with various tints of cathedral glass in lead quarries. The pews, and most of the internal joinery, are of pitch pine. The entrance doors are of Riga oak, in small panels. The platform and choir’s seat will be arcaded with shafts of walnut and caps and bases of lime tree.

Behind these rises a lofty pointed arch, in which are placed three richly-carved stalls with gabled canopies. At the rere of the church are—a session-room, minister’s-room, and ladies’-room, with lavatories attached. It is proposed to heat the church by a hotwater apparatus placed in the basement, and the lighting will be by coronre and standards, designed in accordance with the style.

Messrs. J. and J. Guiler, Belfast, are the contractors for the work ; and Mr. John Rhind is the clerk of works. The architects from whose designs and under whose superintendence the buildings are being erected, are Messrs. Young and Mackenzie, Belfast. The cost when completed will be about £10,000.” The Irish Builder, January 15 1878