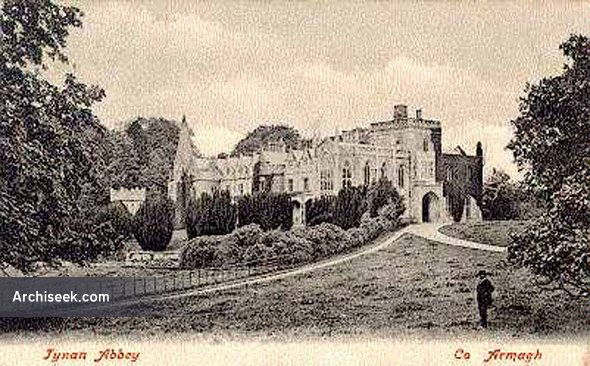 Designed by John Nash who had a cluster of work in the area including Caledon House in Co. Tyrone, and some lodges at Castle Leslie in Co. Monaghan, both very close by. Later adapted by William Barre and W.H. Lynn.

By 1838, George Petrie of the Ordnance Survey described it as a “fine specimen of bastard and vile gothic architecture.” In 1855, however, Sir Bernard Burke said it has a “picturesque appearance”. One hundred years after this assertion Tynan Abbey was still being pondered upon; Richard Hayward questioned its “dubious…architectural integrity, but mellowed by time, humanised by generations of affectionate occupancy.”

Destroyed in a terrorist attack in 1980 when Republicans attacked the house, murdered the owner and his son, and set fire to the building. The ruins were later demolished due to safety concerns.