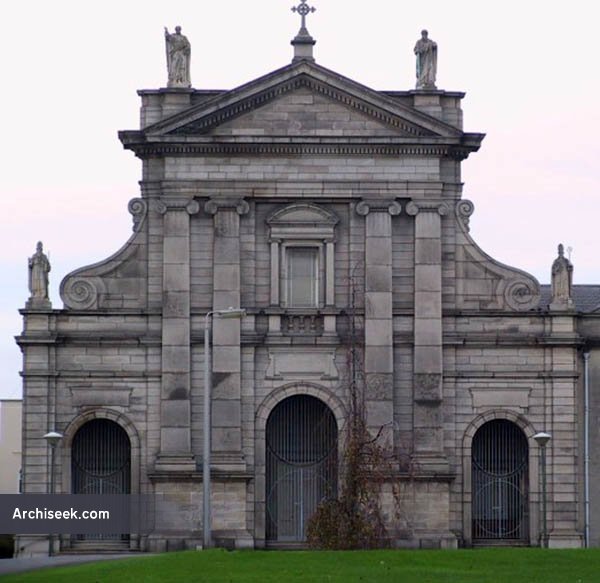 “This church, which has been erected from designs by Mr. J. J. M’Carthy, R.H.A., was solemnly dedicated yesterday by his Eminence Cardinal Cullen. The church consists of a nave 123 ft. in clear by 60 ft. across the aisles. The height is 47 ft. to the ceiling. The Roman basilica style has been adopted for the interior. The nave terminates in an apsidal sanctuary. The nave and aisles are separated by seven bays of semicircular arches resting on red marble pillars 15 ft. high, each pillar being of one single block.

The Ionic capitals and bases are of white marble — the subplinths of Galway black marble. The arches are furnished with suitable architraves, and over these an Ionic entablature is carried completely round the nave, sanctuary, and apse. The clerestory walls rise above this entablature, and contain five windows on each side. Between each window is a large space, filled with a gorgeous painting, the work of Gagliandi. The subjects of the paintings are taken from Scripture and ecclesiastical history, and all have reference to the incidents connected with the Cross. The aisle side walls are divided into bays, corresponding with those in the nave, by pilasters and semicircular arches, every arch being filled with a lunette window.

The apse is marked off from the nave by a semicircular arch, finished with moulded architraves and resting on broad twin pilasters. The side chapels are also marked off from the aisles by moulded arches and pilasters. Confessionals are inserted in the walls of the aisles, and the church and the college are connected by a cloister on the north side of the former. The vestibule is entered from the college grounds by three open archways, and at the right hand end, as one enters, is placed the noble and richly wrought marble statue of Pius IX.

Over the vestibule in the church is an organ of great power and sweetness, built by White, of York Street. In the space between the divisions of the organ are emblazoned the Cardinal’s archiepiscopal arms, beautifully carved in high relief, upon a ground 7 ft. square. This fine piece of work is by Mr. J. R. Boyle, jun., of Upper Gloucester-street, and is very creditable. The encaustic tiling was supplied by Messrs. Sibthorpe and Son and Messrs. Monsell, Mitchell and Co.” The Irish Builder, September 15 1876.