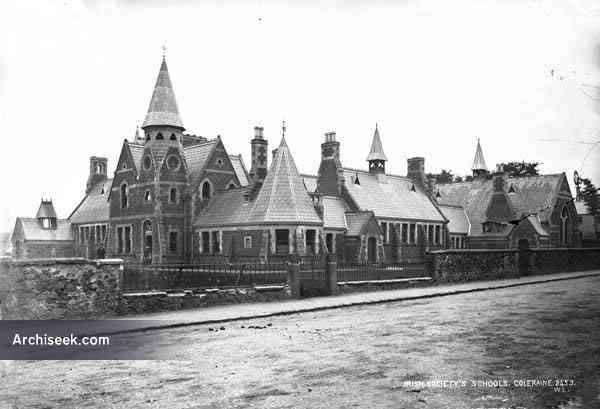 “The handsome and commodious school buildings erected by the Hon. the Irish Society, in Beresford-place, Coleraine, have been opened by the Society’s agent, Walter Green, Esq., J.P. The buildings comprise four sections—boys’, girls’, and infants’schools, besides residence for the head master.

In external appearance they are remarkably attractive ; the removal of the old school premises having contributed materially thereto. Internally, nothing could be more commodious, and even elegant, whilst every minor detail which would strictly carry out the primary purpose of the liberal founders, has been carefully considered. The schoolrooms (with the class-rooms adjoining) are capable of accommodating 200 children in each. Particular attention has been given to the lighting and ventilation, which have, so far, proved satisfactory. Messrs. Turner and Williamson were the architects, and Messrs. J. and R. Ferguson, Pump-street, Derry, the contractors. The cost was about £5,000.” The Irish Builder, October 15 1869.

The school is now used as housing. It has been very tastefully and sympathetically converted into apartments.