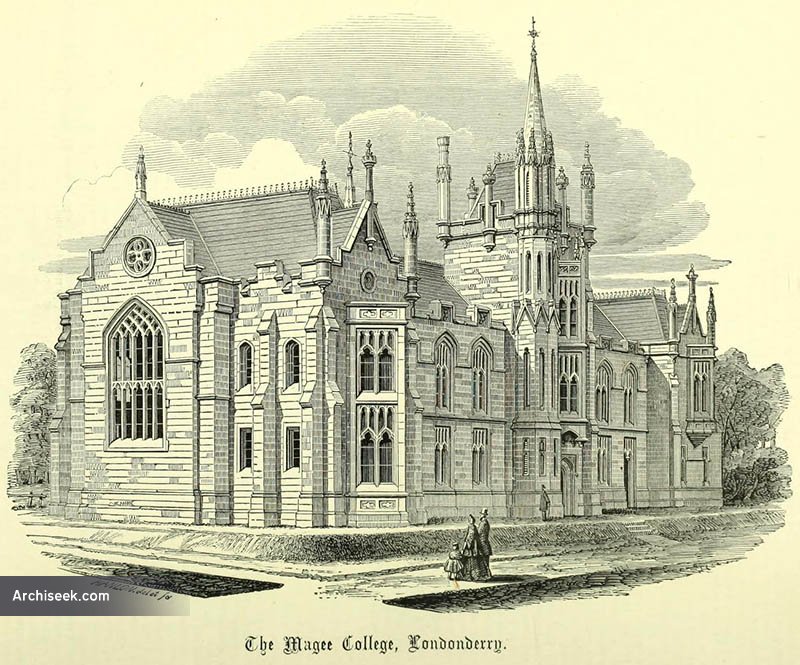 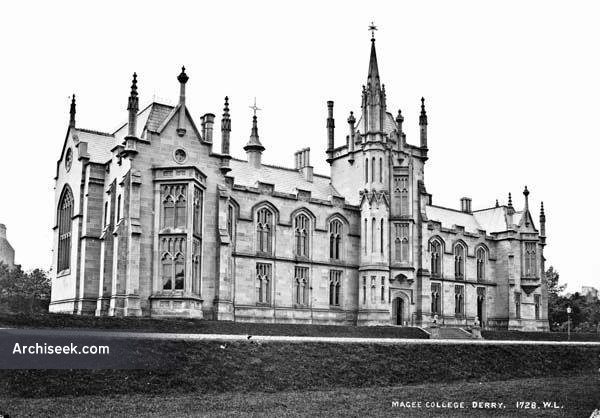 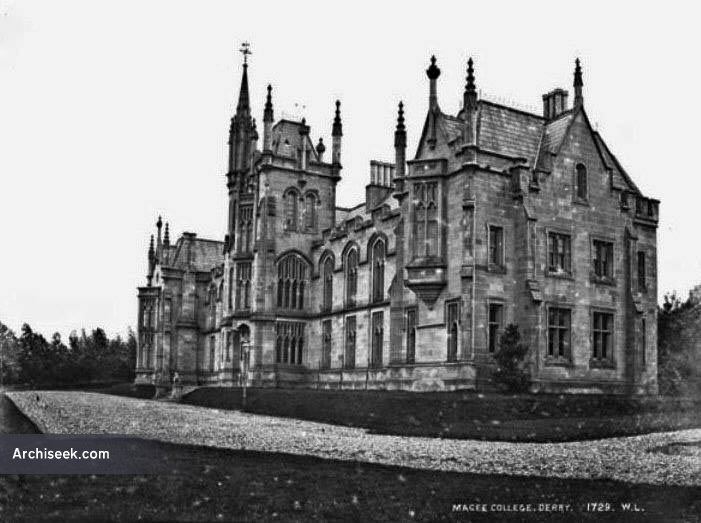 The design for Magee College was selected in competition. Building work took several years, with the foundation stone laid in 1856, but the building largely complete by the end of 1859. Gets its name from Martha Magee, the widow of a Presbyterian minister, who, in 1845, bequeathed £20,000 to the Presbyterian Church of Ireland to found a college for theology and the arts. Opened in 1865 as a Presbyterian Christian arts and theological college, but now part of the University of Ulster with no religious affiliations.

“IN our recent special notice of the city of Londonderry — under the head of “Towns Survey”—we referred, amongst other buildings for which it is distinguished, to the New Magee College; and in accordance with the promise at the time conveyed, we now present our readers with an engraving” therof. The plans for this structure were adopted in competition nine years ago—viz., in the year 1853; but a change of site and other circumstances delayed the commencement of the work for some years after.

The building as erected is only a portion of the original plan, embracing only half the class-rooms, and not including the professors’ residences; but it was so arranged as to be complete as it stands, and not to present an unfinished appearance. –

The exterior is faced with cut stone (from the Bishopbridge quarries near Glasgow, of which Messrs. Leadbetter, Govan and Company are proprietors), which, together with the other works throughout, were executed in most superior style by Mr. Matthew M’Clelland of Derry, an eminent builder, under the superintendence of the late County Surveyor of Londonderry, Mr. Stewart Gordon, C.E.

The design, however, was furnished by Mr. E.P. Gribbon of Dublin, who was also architect of the Presbyterian Church on Ormond-quay in this city, and various other creditable productions; but who of late appears to have given himself up to the more profitable occupation of an arbitrator and building surveyor, being, as is well known, Government Quantity Surveyor to the War Department, besides being one of the most popular building surveyors in ordinary practice.

The Magee College, as we mentioned on a former occasion, is distinguished, like some other works of Mr. Gribbon, for great effect at small cost, and is an ornament to the prosperous city of Londonderry, of which the inhabitants are justly proud. Though we seldom are inclined to pronounce judgment on the works of livingarchitects, we must say as regards this, that we feel pleasure in congratulating the architect and trustees on the successful issue of theirundertaking.