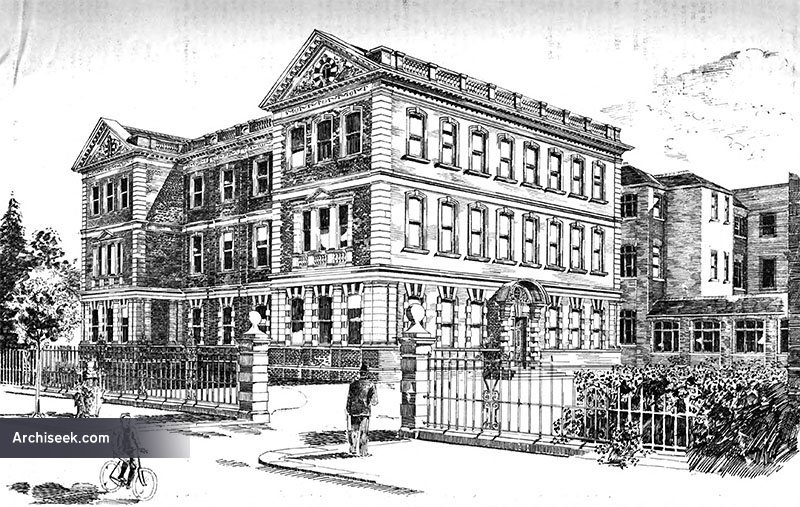 Constructed as the Auxiliary hospital, later the Thomas Plunket Cairnes wing. The architect Albert E. Murray was chosen after a limited competition. The main southern facade is now obscured by later extensions to the hospital, while the western side can still be seen along Parnell Square. An additional storey was later added and the pedimented ends removed..

“There is at present an Auxiliary Hospital, but it is very old, and, not having been originally built for the purpose to which it is now devoted, it is not at all suitable; the governors, therefore, decided on erecting this new building. It will be carried out with all modern improvements-well-ventilated wards, good sanitary accommodation, operating theatre, lift, &c.

This new structure will be connected with the old by a corridor on each landing, and the lift and sanitary block are so arranged that they will be equally of use to both houses. There are also provided soiled clothes shoots, disinfecting chambers, and stores for patients’ clothes, &c.

Exterior is to be carried out as much as possible in the same style as the main building, except substituting red brick in walls instead of stone.

We hope soon to see this much-wanted addition commenced, not only for the good of trade, but for the benefit of the suffering poor, who stand so sadly in need of it; and we understand that, when erected-from its close proximity to the main building and greater convenience it will afford,—in every way the governors hope to effect a saving in the working of the institution.”