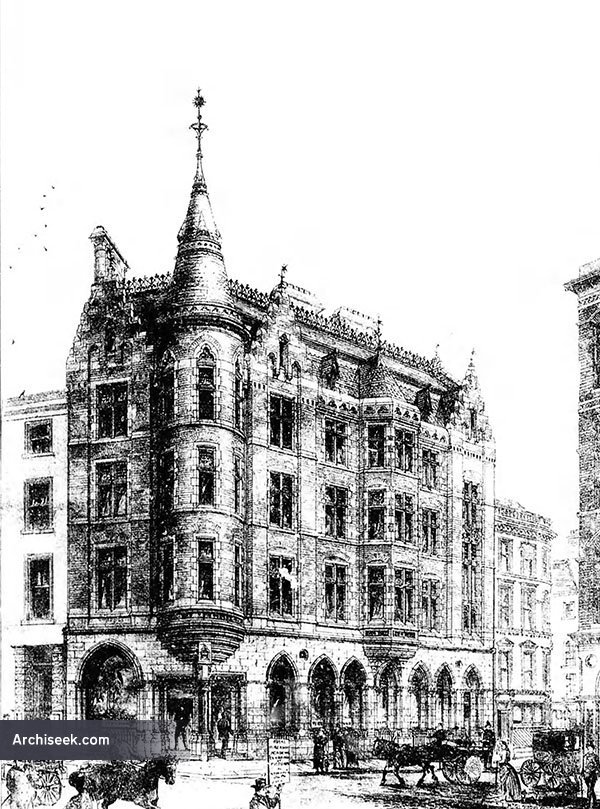 These offices for the Sun Alliance Fire and Life Co., were built after a competition to the designs of George C. Ashlin. Sited at the corner of Andrew and Trinity Streets, it was demolished in 1958, a sad loss to Ashlin’s work. Mainly an ecclesiastical architect, his one other commercial building in Dublin is on Westmoreland Street.

“The above-named buildings, of which we give a view in this issue, have for some time been in course of erection in St. Andrew street, at the intersection of Trinity-street, and are a respectable addition to the many insurance offices in this city. The material used for ground storey is Dalkey granite with dressings of Portland stone, the shafts at principal entrance being of Galway marble. The upper portion is of red brick, with similar dressings, the whole surmounted by a Mansard roof, having lead and slate covering.

The principal office is 16 ft. in height, the upper floors being 12 ft., 11 ft., and 9 ft., while the basement is 9 ft. 6 in. The internal fittings will be principally of pitch pine, mahogany, and ebony. From Trinity street, through a carved and moulded doorway, are entered by a stone stairway the public chambers. The entire of the work has been carried out by the contractors, Messrs. Meade and Son (with the exception of a portion of the ornamental iron work, which has been executed by Messrs. Fagan and Son). Mr. G. C. Ashlin, A.R.H.A., is the architect.”