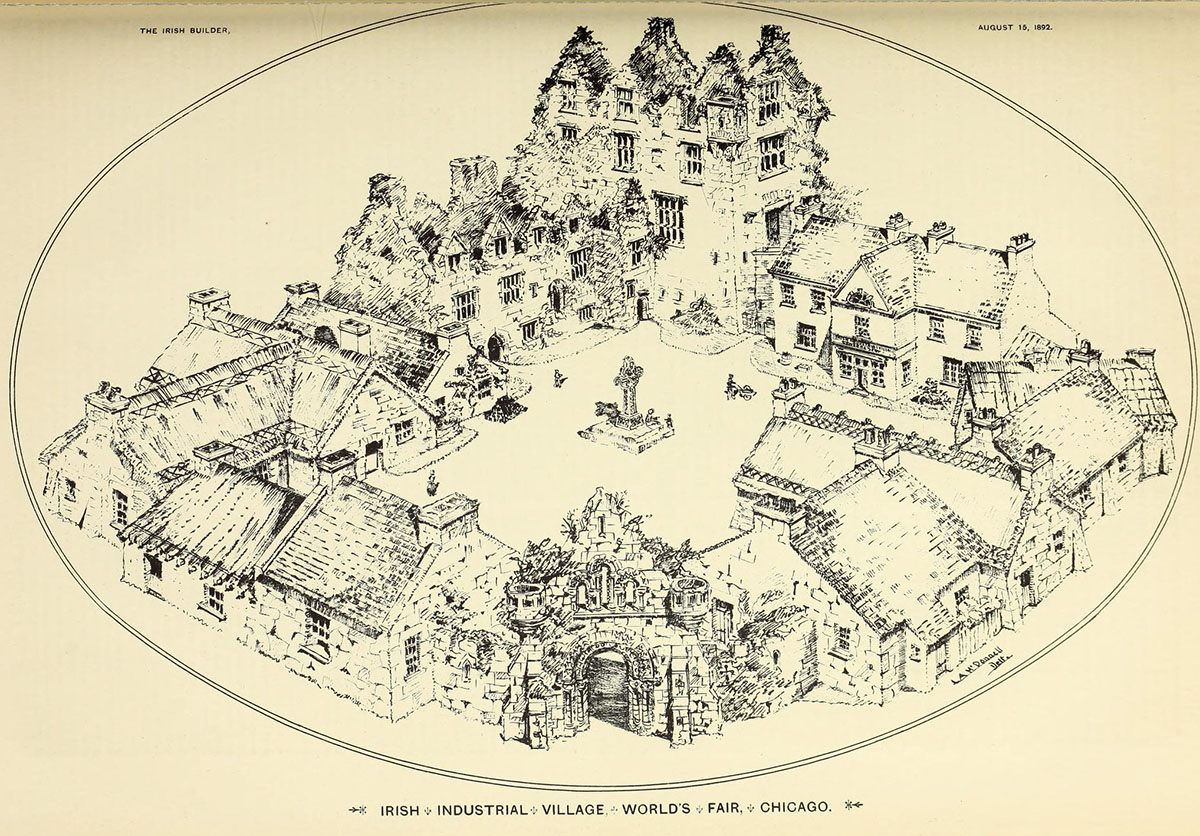 Dedication ceremonies for the fair were held on October 21, 1892, but the fairgrounds were not actually opened to the public until May 1, 1893. The fair continued until October 30, 1893. In addition to recognizing the 400th anniversary of the discovery of the New World by Europeans, the fair also served to show the world that Chicago had risen from the ashes of the Great Chicago Fire, which had destroyed much of the city in 1871

“This week we are enabled to reproduce the preliminary sketch for the Industrial Village which it is proposed, to build at the Chicago Exhibition, and in which will be shown a number of the cottage industries of Ireland, and the people at work in the cottages at their several trades.

The general scheme is as follows : — The Village will be entered at the angle, through a gateway, or the gable-end of a Celtic church, for which a good example will be followed, the one shown in the present sketch being only imaginary, it having been prepared in haste for a committee meeting on the 9th of present month.

The cottages are entered from the right- hand side, and the plan is so arranged that one can get from cottage to cottage without going outside. At the top of the Village is placed the shop, where the produce of the workers will be sold ; and behind the shop are offices and committee-rooms.
In the corner opposite the entrance it is proposed to reproduce Donegal Castle, reducing the scale by one-quarter ; and the interior of the castle will be utilised for a lecture theatre and museum, lighted from above, the roofs being kept down between the walls, so as not to mar the ruinous, picturesque appearance of the castle from the exterior.

The architect is Mr. Laurence A. McDonnell, 28 Lower Pembroke-street, who has been engaged by Lady Aberdeen and the committee, as soon as the plans are agreed to, to proceed to Chicago, and have the work carried out under his personal superintendence.” The Irish Builder, August 15 1892