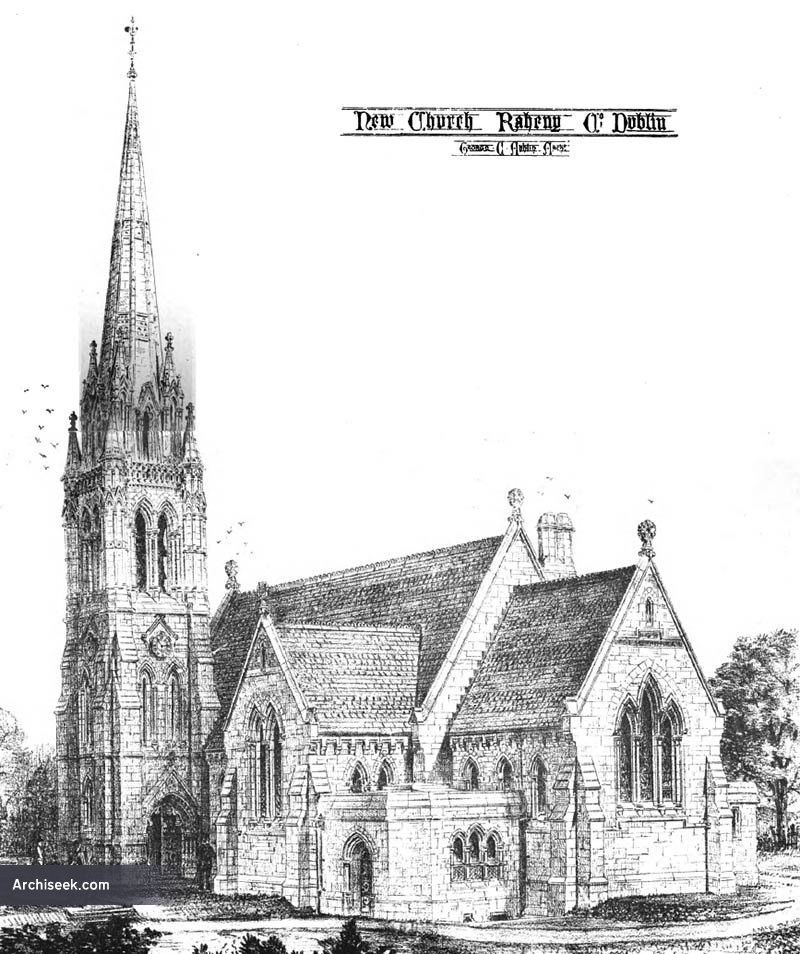 In 1881, Arthur Edward Guinness, Lord Ardilaun proposed to construct a new church, on a site he would provide at the village end of his St. Anne’s Estate, and this was agreed by the parish in 1885. Lord Arthur’s father had previously agreed with the Parish to build a new church, but the plans did not come to fruition.

The building style is described as “early English”, and it has a cruciform shape. The walls are of Wicklow granite, with limestone dressings, and there is a substantial belfry, with Cumberland slates, an octagonal spire and a weathervane. There is also a small crypt, where some of the Guinness family are buried.

“This church was commenced in 1885, and has been carried out at the sole cost of the Right Hon. Lord Ardilaun. It was built to replace the old parish church, which was very much out of repair. The church, which is in the Early English style, consists of a nave, transept, and chancel, forming a cruciform plan, and has a circular baptistery and tower flanking the front on each side. The building is of granite, with dressings of Drogheda limestone, and the roof is covered with Westmoreland green slates.

Internally the walls are finished in Bath stone, the baptistery being groined in the same material. The nave and chancel roofs are of pitch pine panelled. All the windows are plain lancets—those in the gables being grouped together in large enclosing arches, and all are treated richly with columns, caps, and bases, outside and in, and richly-moulded arches.

The sacristy is on the north side of the chancel, and opposite thereto is a private mortuary chapel with a burial vault under, for Lord Ardilaun’s private use. This mortuary is groined in Bath stone, and the outer covering of the roof consists of limestone slabs so arranged and locked together as to form a perfectly tight roof, even in dependent of the asphalt covering on which it is laid.

The floor of the church is in wood block and ceramic mosaic, from the architect’s design, and was laid by Messrs. Oppenheimerand Co., of Manchester.

The furniture is all in Riga oak, and is a very fine feature of the interior; it, as well as the alabaster font and the tower and spire, were executed by Mr. A. P. Sharp, of Dublin, the remainder of the building being by Messrs. Collen, Bros., of Portadown.

The mortuary, before mentioned, and also the entrance wall and piers now in course of completion, are by Messrs. J. and W. Beckett, of Ringsend. The font cover, entrance gates, and the ornamental hinges of the church doors, are by Messrs. Fagan and Son; and the iron grilles of mortuary are by McGloughlin, Bros., of Dublin.

All the work has been carried out from designs by and under the direction of Mr. G.C. Ashlin, architect, of this city, at a cost of about £9,000, and forms a fine monument to the munificence of the generous donor, the tower and spire being a conspicuous and beautiful object from a considerable stretch of the Howth-road.” The Irish Builder, July 15 1891.