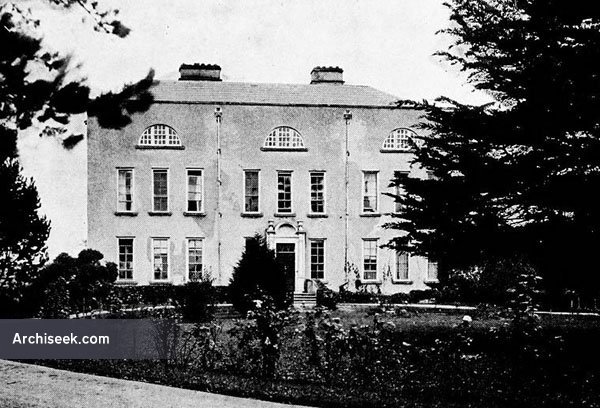 Turvey House was demolished in 1987. Originally built in the 16th Century by Sir Patrick Barnewall using the stones from the ruins of Grace Dieu Nunnery. A late 17th century house was built around the original tower house, this was later adapted during the 18th century with the removal of its gables.

Described in 1906: This mansion, situated in County Dublin, close to the village of Donabate, is probably one of the oldest houses now standing in Ireland. It is a plain building, having, like Platten Hall, suffered in appearance through the removal of its gabled roof. As it stands it is a seventeenth-century house, though part of an earlier structure which occupied the site would appear to have been incorporated. The original plan consisted of a centre block, in which was the entrance, with wings at right-angles to it at either side. But one of these, has been entirely removed, and the rest of the building considerably altered, apparently in the second quarter of the eighteenth century, to which most of the fire-places and nearly all the joinery, including the principal staircase, may be ascribed. There is another staircase, now disused, Jacobean in plan, with twisted balusters and a central well. Here and there are specimens of seventeenth- century panelling, but the panels in the reception-rooms are early Georgian.

Formerly the house had three gables in front, but, as may be seen in Plate LXX, these gables have had the spaces between_them filled in, and the present parapet added. The semicircular windows belong to the same transformation.

The size and position of the old gables and windows can be clearly traced in the attics, which are unusually large and really fine rooms, though for some reason never finished. The Georgian roof is carried in a single span over the main roof ; it is supported by huge quern post trusses.

In front of the house the ground-level has been raised ; and, as we have seen in other houses altered at the same period, the hall-door is on what was originally the first floor.

There is a secret room, the windows of which have been built up, which was apparently reached from a sliding-panel on the old staircase ; but as the opening was blocked when the panelling was removed, there is now no way of access.

The date (1773) on the Venetian window shows that it was put in some years after the general rebuilding ; and, judging by the coarseness of the workmanship, we may attribute it to some local mason, who attempted to copy the earlier Georgian detail.