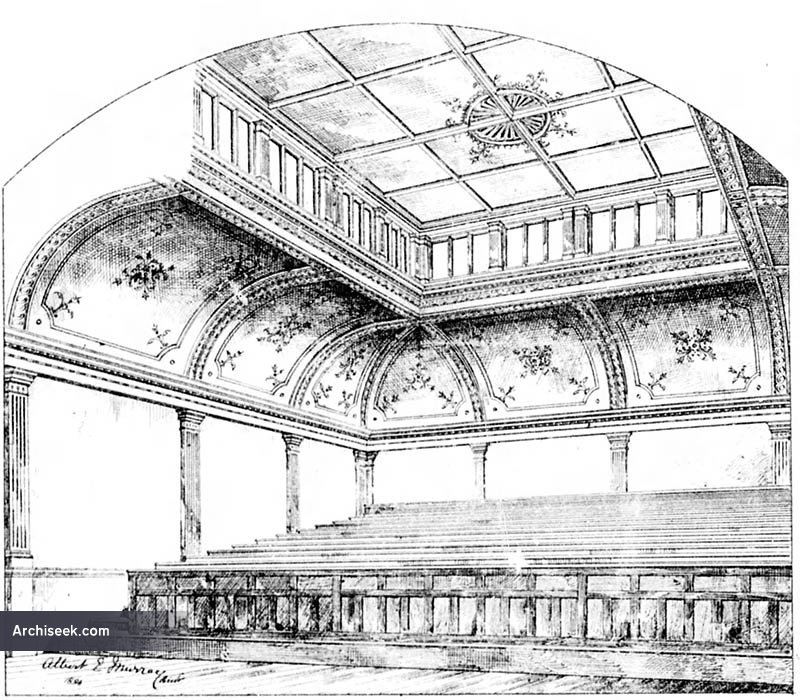 Constructed for the Incorporated Law Society of Ireland at the Four Courts complex.

“In a former issue we noticed that this theatre was being erected from the designs and under the superintendence of Mr. Albert E. Murry, FRIAI, Dawson-street, who won same in a limited competition. The theatre is situate at top of the Incorporated Society’s Buildings as the Four Court. One of the difficulties that the architect had to meet and overcome was to erect a theatre suitable for the purposes of lectures, without raising same to a greater height than adjoining buildings. This has been more satisfactorily carried out, and the necessary air, space and light arrived at by the design as shown. Pilasters, cornices and enrichments have been executed in Keene’s Cement, which naturally gives a fish to the work that cannot be arrived at with ordinary plaster. The theatre is 40ft. by 40ft., and lantern 20ft. by 20ft., ventilated on what is known as the “Tobin” principle – and heated by hot-water pipes under seats. The building is now completed and will be opened next session. The contractor was Mr. J.P. Pile, Great Brunswick-street.” The Irish Builder, January 1 1888.