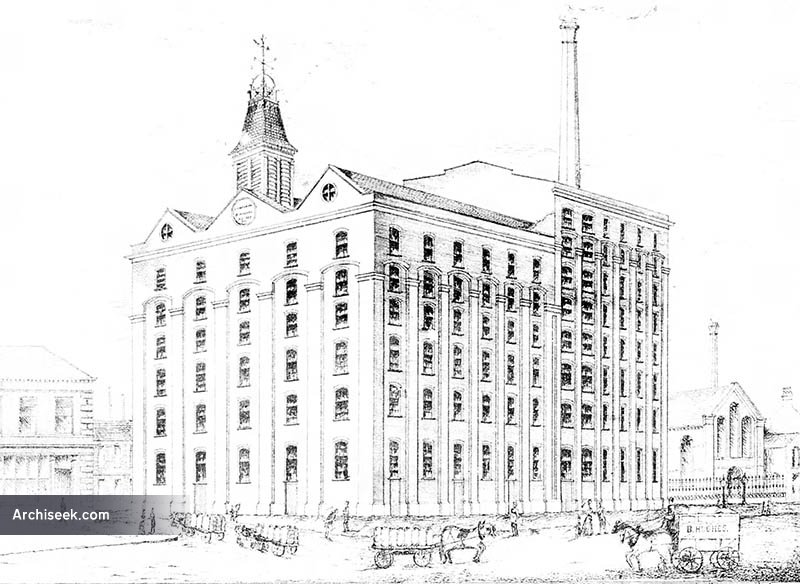 Vast flour mills owned by Barney Hughes, and known locally as “Barney’s Mill”. Hughes was a successful businessman and donated to help build St. Peter’s Cathedral. The streets around the mill developed to provide accommodation for the employees of the enterprise. But by 1900, some yearsafter the death of Barney and his son Edward, family disharmony and a downturn in the milling industry meant that the equipment was sold off and the company concentrated on their bakery business. By 1920, they boasted that their bread was available in a 100 mile radius of Belfast, even to the outskirts of Dublin but after Partition they concentrated on the six counties of Northern Ireland. The Hungarian Flour Mills was later leased out to continue as a milling operation. In later years the building was derelict and burned down in a fire in 1966.

“Our illustration shows the north and east fronts of these extensive premises, which have lately been completed, and are now in full working order; and, whether as regards size or equipment, they are fully entitled to rank amongst the most extensive, as well as the finest, in the three kingdoms. 176ft. in length, and 75ft. in width, they rise to height of eight storeys in the granary and cleansing departments, and in the milling portion to the height of six storeys.

The machinery, which is on the latest and most improved Hungarian principle, was supplied through the agency of Mr. Henry Simon, Manchester, and the high and low pressure engines, having a nominal horsepower of 600, were obtained from the celebrated local engineers, Messrs. Victor Coates and Co., of Belfast.

The magnificent machinery with which Mr. Hughes has supplied his mills will enable to produce flour equal to that made by the best millers of Austria or America, and this to successfully compete against foreign imported flour. In this way he is not only able to supply flour for consumption in his own celebrated Model Bakery, but to send it out in immense quantities to the principal dealers throughout the country. Indeed it may be truly said that Mr. Hughes has spare no expense in order to be able to satisfactorily supply the home trade.

The buildings have been erected from the designs of Mr. Alex McAlister, architect, of Belfast, and under the superintendence of Mr Adam Dorrian, clerk of works.” The Irish Builder, November 15 1884.