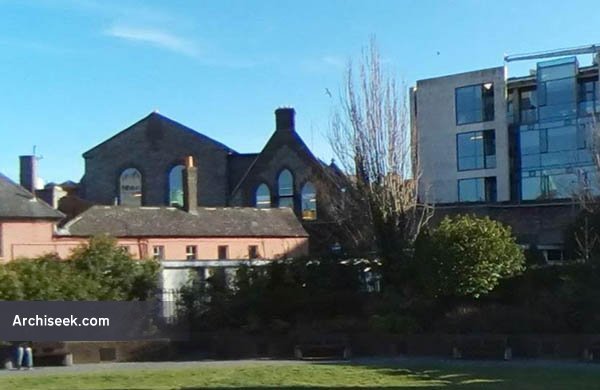 Most of this Wesleyan Methodist building still exists, hidden from George’s Street by early 20th century buildings, but visible from the gardens of Dublin Castle. It has been converted into a gym with extra floors installed into the roof space. Some original features including corbels and roof beams can still be seen internally. Also known as George’s Hall

“The outward appearance of the building will be plain and unimposing, without any attempt at outward effect, the style being the Early English. The schoolroom will be 80 feet in length by 34 in width, and 16 feet to the springing of the roof, thereby affording ample space for proper ventilation. The principals of the roof will he of open timber, springing from plain cut stone corbels, and internally the height from the floor to the roof will be 30ft. The arrangement in the design for lighting, which is next in importance to ventilation, considering the awkward situation of the building, is admirable, there being three large lancet-shaped windows arranged for each end, no side lights being practicable. The internal fittings of the schoolroom will also be most conducive to convenience, and in connection with this it may be mentioned that there is space set apart in the plan for a neat library room, to be erected at some future day. The material of which the building will be composed is of stone, with brick facings to the windows. Its capacity of accommodation will be to the extent of 500 children, and the estimated cost, including purchase of ground, about £1,500. The designs are by Mr. Joseph Maguire, architect. The contractors are Messrs. William Crowe and Sons.” The Dublin Builder, May 15 1864