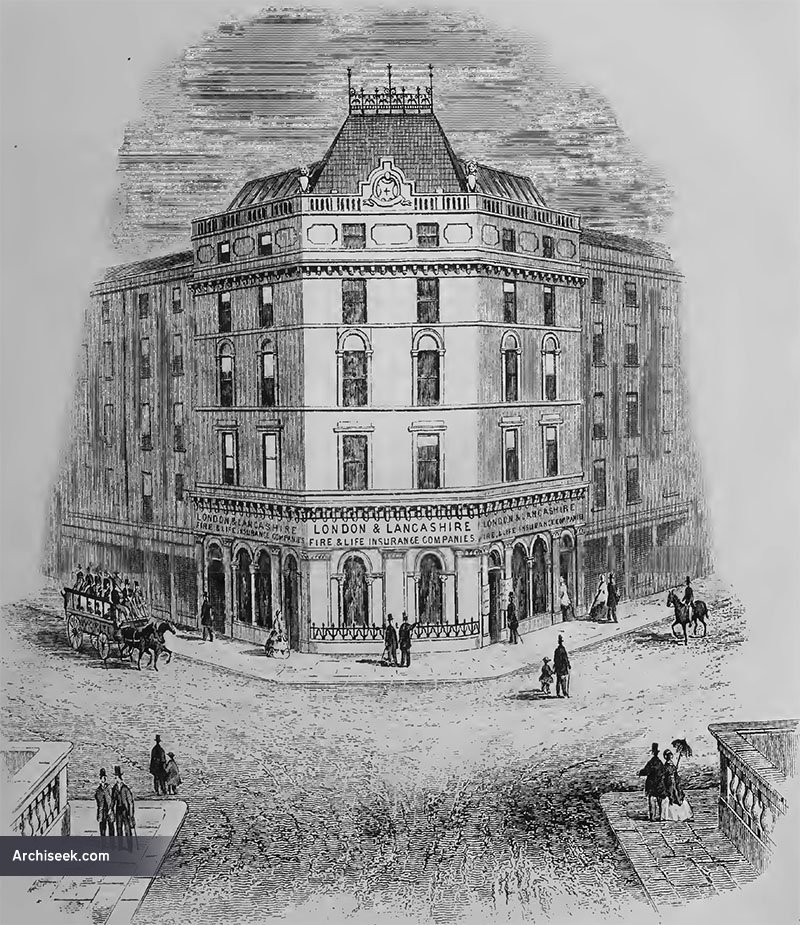 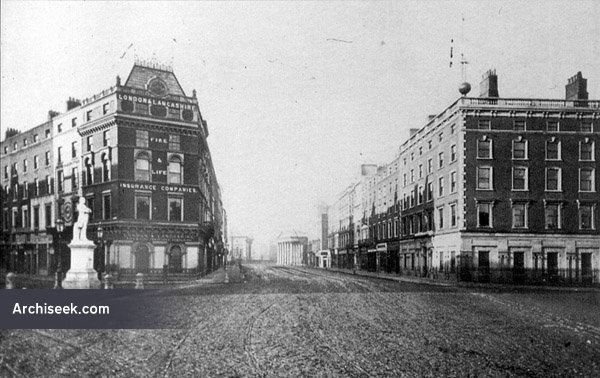 A rebuilt and revised corner building on a Wide Streets Commissioners plan, on D’Olier and Westmoreland Street facing across Carlisle Bridge. Replaced by a Portland stone gothic design by J.J. O’Callaghan in the mid 1890s.

“This above company having recently extended their fire and Life branches to this city, chose for the purposes of their offices one of the finest sites, perhaps, that could be obtained. Situated at the south side of, and facing Carlisle bridge, at the corner of Westmoreland and D’Olier-streets, the building, presenting three fronts, is visible from nearly every part of Sackville-street, and Cavendish-row, and also from the quays on either side. The upper portion has been secured as a photographic gallery, while the lower is occupied by the Insurance Company. The necessary alterations have been completed by Mr. Morison, and the decorative part was entrusted to Mr. Samuel Eakins, of Sackville-street.

The entrance from Westmoreland-street is by a small polygonal-shaped poroh, from which you pass through a pair of glass panelled swing doors to the front office facing this street. Two handsome circular- headed windows, having single panes of plate glass, and separated by a small carved column, give abundance of light. The fittings of this office are of oak grained and varnished, and an oak fluted cornice is carried round the room, while the gilt ribs of the groined arched ceiling terminate in a flowered ornament just over it; the ceiling is painted in a green ground relieved by gold stars. Three large circular carved ornaments in grained and varnished oak are centrally placed on different sides of the room. From the front office there is approach by a glass panelled door to the manager’s office, which faces D’Olier-street ; this office is fitted up in admirable style. A third and smaller office is situated in the front immediately facing Carlisle bridge, and it also is neatly fitted up. The windows in these offices are same as above mentioned. The cost of the alterations was over £300.” The Dublin Builder, August 15 1864.