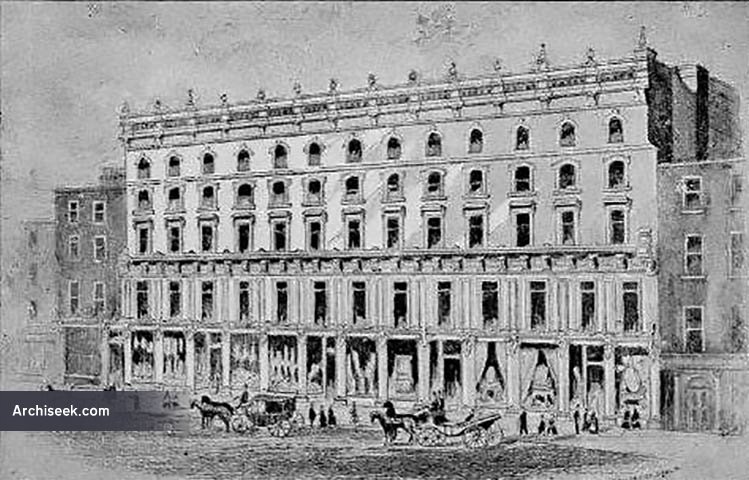 Like others of the Dublin department stores of its era, the original Arnott’s started life as a brick faced building that was later extended and stuccoed over to present a consistent facade. It seems that the original block which stretched from Princes Street to Henry Street was completely destroyed in 1894 after a fire. G.P Beater who was responsible for the replacement store was involved with Arnott’s from 1875 onwards, designing a restaurant and confectionery shop also on Henry Street.

A description published in 1875: “The premises now erecting for Messrs. Arnott and Co., in Henry-street, will contain besides the front and back shops (the latter of which will be used as a luncheon saloon), two large dining and refreshment rooms for ladies, with dressing-rooms, lavatories, &c., off same. There is also a dining-room for ladies and gentlemen, 27ft. long and about 20ft. wide. The basement contains kitchens, bake-house, scullery, wine-cellar, larders, &c., &c. The front elevation is of red brick with limestone balcony and Portland stone strings &c. The spandrils formed by the front will be filled in with encaustic tiles. The fixtures, counters, &c., in shop and dining-rooms will be of pitch pine and yellow pine with American walnut in a few places. The whole is intended to be French polished. Mr. Geo. P. Beater, Sackville-street, is the architect, and Mr. P. Brodigan, Grantham-street, the contractor.”