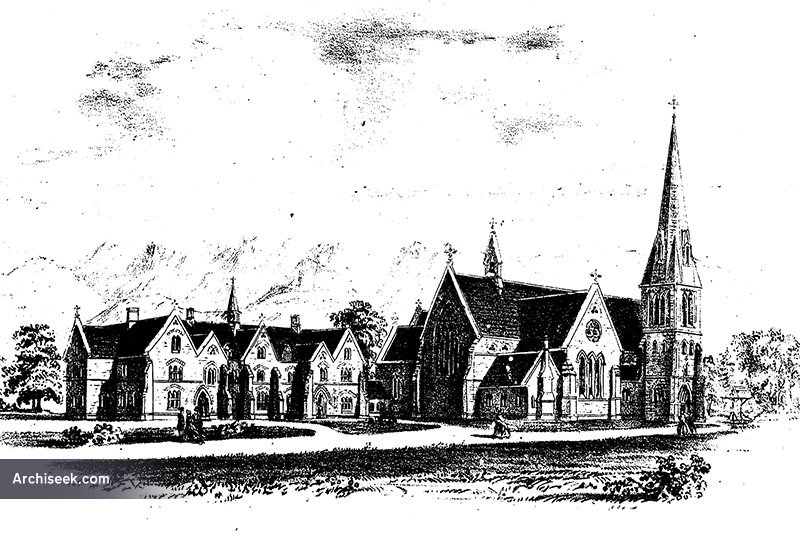 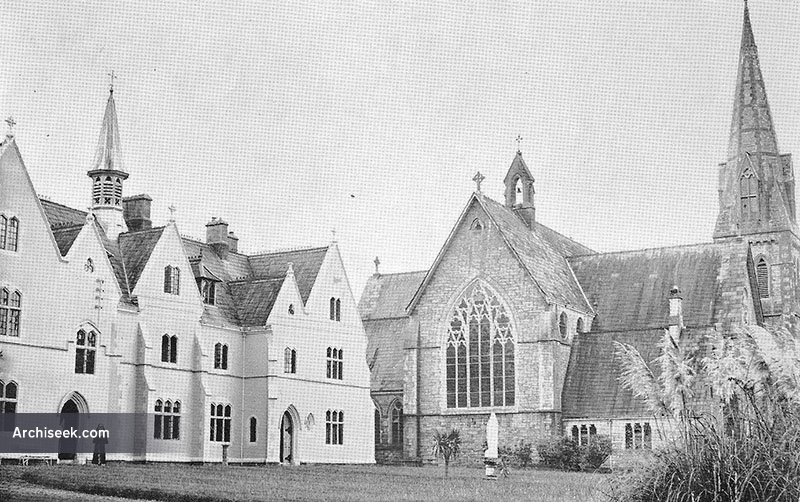 The convent which opened in 1861 closed in the mid 1990s and has since been demolished. The church was consecrated in 1864. It was built under the guidance of Archdeacon Fr. John O’Sullivan – who is interred within the church. The church has stained glass windows by O’Connor, London, Caseys, Dublin; and by Earley, Dublin. The organ is by Telford & Telford.

“The building, which, in point of architectural style and finish, is inferior to none in Ireland, and to the eye of the connoisseur is decidedly the chastest even in Kerry, where handsome convents abound, is of the mixed Gothic style, blended with the Elizabethan ; and to our mind, though no sacaus in architectural beauties, is a graceful relief to the sombre heaviness of the purer Gothic. The design by Mr. Hansom, who also designed the private church of Lord Castlerosse, shows a front with two returns; and with the schools,which are part of the main building, form three sides of a square, with courtyard to the rere and cloisters running all round. To the traveller or tourist entering Kenmare by the Killarney road, so famed for its command of scenic grandeur and effect, the tout ensemble is singularly striking, with full front direct in view, its light graceful belfry shooting high up in the form of a spire, and its several sharp pointed gables-all completing an object charming in perspective and serving as a very creditable monument to the genius of the man whose creation it is. A noteworthy fact is, that in the execution of the work, for the first time, as we have heard, in Ireland, the English Bath stone has been substituted in the facings and dressings for the common lime-stone of the country; and the substitution has resulted in advantages which we have not time to detail, not the least being their easy and rapid manipulation with the plane and saw. It will serve to give an idea, better than we can convey, of the beauties of the new convent which harmonises so much of the useful and ornamental in so small a space, that this accomplished gentleman,” who has sojourned in Italy and travelled other lands—who is familiar with the chefs d’aeuvres of architecture in these kingdoms, was struck with admiration of its beauties.” The Irish Builder, April 1 1862.

“OUR lithograph impression for current number represents a perspective view of this pleasing group of buildings recently erected at Kenmare, from the designs of Mr. Hansom, of Clifton, near Bristol, architect; Mr. D. W. Murphy, of Bantry, being the builder. In the district wherein this structure is situated, so architectural a com position is exceedingly rare, the distance between those having the slightest pretensions to merit being “few and far between,” indeed; and therefore, when existing, entitled to the greater publicity, both in just acknowledgment of intrinsic merit, and with a view of in producing the worthy example to be followed elsewhere. The design of the building illustrated, which is in the Gothic style, adapted to conventual and scholastic purposes, speaks for itself; and to the un exceptionable character of the workmanship throughout, the well earned reputation of the builder, Mr. Murphy, who has executed the majority, if not all, of the important works in this and surrounding counties, affords a testimony which our information in this individual case fully endorses. The internal arrangements, which comprise suites of apartments for religious, reception, domestic, and a variety of other purposes, with spacious approaches, are distinguished for their general excellence. The material employed throughout for the more substantial portions is mostly local, and the fittings and decorations are appropriate to the style of architecture adopted.” The Irish Builder, November 1 1862.