The Savoy Cinema under construction 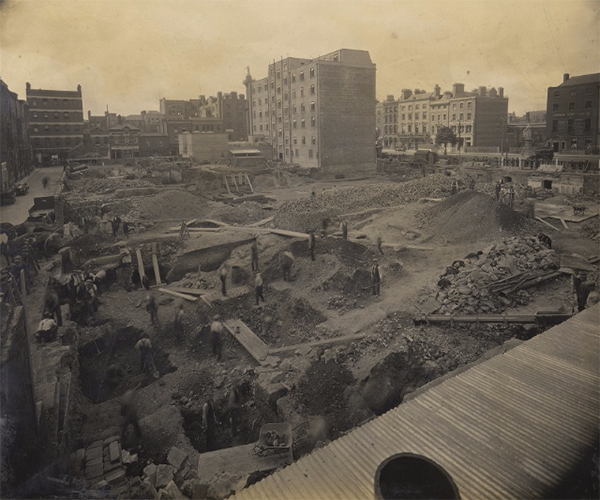 UCD Digital Library, in partnership with the Irish Architectural Archive, is delighted to present the Savoy Cinema Album This wonderful collection features photographs recording the construction of the Savoy Cinema, O’Connell Street, Dublin and its appearance on completion. T

he twenty-five images, spanning the period from July 1928 to January 1930, show key moments in the construction process, including site clearance, ground works, steelwork, stone work, internal work, and the completed interiors and exterior. The photographs also capture incidental details of the period such as the nature of construction sites, the labourers’ attire, vehicles, and general Dublin street life.

The Savoy Cinema was built on the site of the Granville Hotel by Meagher & Hayes for Associated Irish Cinemas, a subsidiary of Associated British Cinemas. The cinema was designed by the architect Frederick Charles Mitchell, with interiors by W. E. Greenwood. The Savoy was opened by President W. T. Cosgrave on 29th November 1929.

View the collection online at http://digital.ucd.ie/view/ucdlib:45872.