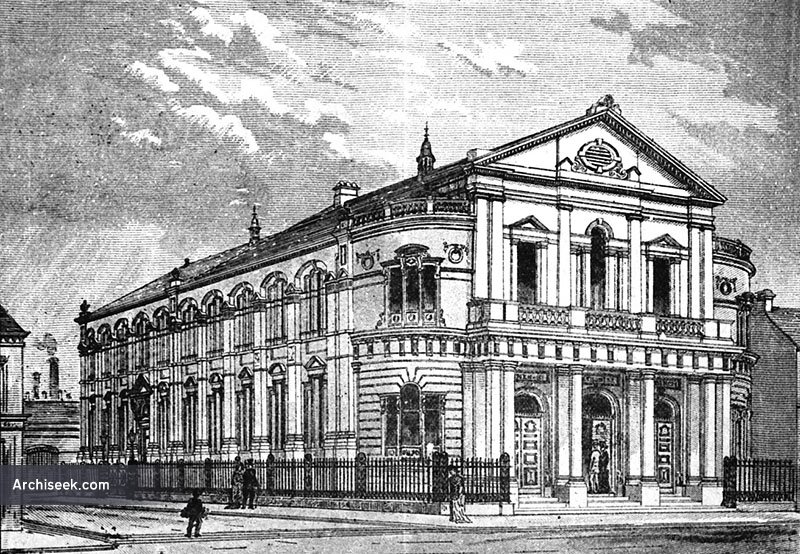 Church described as being ‘in classic style’ and built on site of former church of 1848 and adjoining school building. Schools completed June 1886 with the church with seating for 900 opened in early 1887. Cost: £3,750.

“This church has been opened for Divine worship. The old church, on the site of which the present building stands, was erected in the year 1848, when the congregation belonged to the Frederick-street circuit. In the year 1864 it was constituted a sepa: rate charge for one minister, and since that time it has maintained itself without any aid from the Home Mission Fund. Of late years the church has proved quite inadequate to meet the growing wants of the congregation, which, with the population, has increased to a great extent. And not alone were the wants of churchgoers not properly provided for, but the important matter of education was found to be in anything but a healthy state, and to remedy this drawback it was resolved by the trustees to erect suitable school buildings in connection with the church. This work, being found to be the most pressing, was commenced first, and completed in June of last year. The new church immediately adjoins the school buildings. It is in Classic style.

The principal façade is in Agnes-street, and presents an appearance at once imposing and attractive, with handsome wrot iron railings and gates, by Messrs. Musgrave. . There are three entrance gates and three doors. The vestibule is spacious, well lighted, and floored with encaustic tiles. The interior of the building is very pretty, everything being finished with artistic taste and skill. The remark applies particularly to the platform pulpit, access to which is had from the ground floor by a graceful staircase. The acoustic properties and the gallery arrangements are of the most satisfactory character, the preacher being easily heard and seen from its furthest corner. The church is heated by Musgrave’s small-bore apparatus, and it is lighted by gas coronae and pendants supplied by Mr. J. Dowling. One thing which, perhaps, more than any other gives to the building its handsome appearance is the beautiful coloured windows which have been provided. The church has been erected to accommodate 900 persons, with a due regard to their comfort and convenience. The cost was £3,750, all of which has been provided, except £1,000. The architect was Mr. J. J. Phillips, and the builder Mr. William McCammond, J.P., on each of whom the structure reflects much credit.”

Closed in 1974 and the congregation merged with Shankill Methodist at a new building, designed by Gordon McKnight Architects in 1984.